Allergan, Eli Lilly, Johnson and Johnson, Novartis, Pfizer, Novo, and Sanofi-Aventis filed a ‘citizen petition’ with the FDA, urging the agency to ‘establish comprehensive, clear and binding regulations to guide the industry’ in communicating off-label drug information to physicians and payers. Although the words ‘Internet’ and ‘Social Media’ are not mentioned in the petition, it is likely to hold up social media guidelines regarding ‘unsolicited requests’ that were promised as the first in a series of FDA guidelines. You can find the petition here. 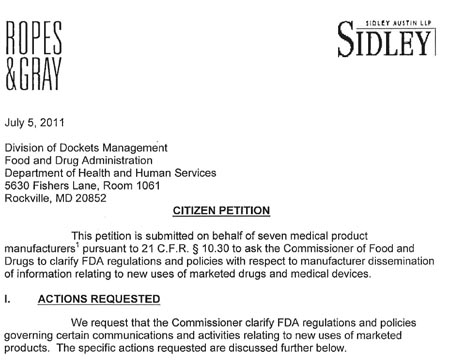 Greg Kuetreman, writing about this petition in a post to Lilly’s corporate blog (LillyPAD), said “we’re not asking for a change in the regulations — just clarifications that will help us communicate in a better way.” But this is not what the petition says. As I quoted above, the petition is asking for “comprehensive, clear and binding regulations.”

In addition to specifically asking for regulations, rather than non-binding guidelines, there are a few other interesting points to make about this “petition” that are relevant to whether or not FDA will be able to issue social media guidance this year (or ever):

The petition asks for regulations regarding manufacturers responses to “unsolicited requests” from physicians for off-label information.

The word “Internet” and the phrase “social media” do not appear in the petition.

“Patients” and “consumers” also are NOT mentioned.

I find these points to be interesting because I recently reported that the FDA 2011 guidance calendar includes guidance for “Responding to Unsolicited Requests for Prescription Drug and Medical Device Information, Including Those Encountered on the Internet” (see “FDA Drops Social Media from Its 2011 Guidance Agenda“). Whether or not such guidance would satisfy the 7 pharma petitioners with regard to “unsolicited” requests is open to debate.

According to the FDA (see here), a citizen’s petition is a way to “influence the way FDA does business… change or cancel a regulation, or to take other action.” The agency receives about 200 petitions yearly. “Ultimately, FDA management decides whether to grant a petition. But first, agency staffers evaluate it, a process that may take several weeks to more than a year, depending on the issue’s complexity. After FDA grants or denies the petition, the agency will notify the petitioner directly. If not satisfied, the petitioner can take the matter to court.”

Since this petition specifically addresses the unsolicited request issue for which FDA planned to issue guidance (see “First FDA Social Media Guidance to Address Responding to ‘Unsolicited Requests’ for Off-label Information“), that guidance will have to be delayed possibly more than a year while the agency reviews the petition.

Last week, at the Pharma Virtual Sales & Marketing Summit, I asked Craig Delarge, Director of Healthcare Professional Relationship Marketing at Novo Nordisk, when he thought FDA would issue social media guidance for the industry. His personal opinion was “not in the foreseeable future.” That comment surprised me at the time, but now I understand why he said it.

P.S. STRANGE COINCIDENCE?
Pharma’s Citizen Petition was filed on the SAME day (July 5) that DDMAC Director, Tom Abrams, said that “publishing social media guidelines for industry is the division’s ‘highest priority,’ and that the document will be ‘published as soon as it’s vetted.'” Abram’s comments were made at the Drug Information Association’s in Chicago (see here).

Lilly’s Greg Kuetreman attempted to answer the question “Why Now?” in his blog statement, saying “Because there continues to be some confusion about what companies can – and cannot – say to health care professionals, payers, and patients about new scientific information.” Considering that there’s ALWAYS been this confusion, Kuetreman’s statement fails to answer the question. I think the answer is that pharma anticipated imminent release SM guidelines by the FDA and wanted to delay that release by filing a Citizen Petition.