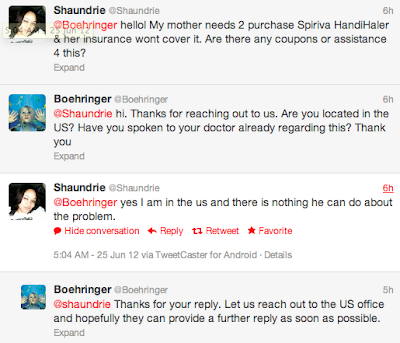 One of the uses for pharma Twitter accounts that many ePatient advocates recommend is to directly support patients seeking help regarding their Rx products (see, for example, this Pharma Marketing News (PMN) article: “Use of Twitter for Patient Support” [free pdf]).

Although nearly two-thirds of respondents to a 2009/2010 Pharma Marketing News survey thought that using Twitter for patient support activities would be somewhat or very effective, relatively few pharmaceutical companies are doing this on a regular basis. From time to time, however, it does happen.

Recently, Boehringer Ingelheim tweeters in Germany (@boehringer) responded to a tweet from a U.S. caregiver who was seeking help in purchasing Spiriva HandiHaler for her mother. First, this person complained to @BarackObama because of the high cost of the product:

BI deserves credit and recognition for using its corporate Twitter account to carry on a conversation about a product rather than just providing @Shaundre an 800 number to call. Also, BI — in Germany — has taken the extra step in contacting the US office on @Shaundre’s behalf.

Avoid Interferring with the Doctor-Patient Relationship
Note that BI first asks if @Shaundre spoke to her (or her mother’s) doctor about the issue. Preserving the patient-doctor relationship is important when pharma deals directly with patients or caregivers. Some comments from respondents to the survey mentioned above included warnings such as “pharma does not like to be seen as a healthcare providers and these activities are part of that” and “I’m sure some doctors would take umbrage at that.”

But most respondents did not dismiss the idea of Twitter patient support outright. About 57% of respondents to the survey mentioned above were of the opinion that use of Twitter by pharma for direct-to-patient support activities could be viewed by physicians as coming between them and their patients. Only 30% said these activities would not interfere with the patient-physician relationship.

Be Non-Promotional
Aside from side-stepping the patient-doctor relationship issue, BI was also careful not to mention any product names in the tweets it wrote. Thus, it cannot be accused of promoting a branded product to consumers, which is illegal in Europe. Of course, BI was having a conversation with someone in the U.S., which makes it even more complicated regulation-wise.

From that point forward it became an off-line discussion, which is just what the FDA recommended with regard to pharma responding to off-label communications online (for more on that, see “FDA Guidance on Responding to Unsolicited Requests for Off-Label Information“).

Are Patient Support Specialists Needed?
When @Astrazeneca — the corporate Twitter account of AstraZeneca — surveyed its Twitter followers, here’s the list of subjects they wanted feedback on (specifically AZ asked followers if they wanted “more” or “less” or “same” amount of tweets about the following topics):

Not included in the list is “answers to patients’ questions,” which after all has not traditionally been the job of corporate communications. Pharmaceutical companies should have a specific Twitter account for patient support. Actually, you can find a pharma “Patient Support” Twitter list when you search Google on “twitter patient support”; it’s janssen-patient-support, a public list by Janssen UK, “designed to support you.” It has 1 member: @Psoriasis360, which has sent out 142 tweets — none of which provide answers to specific questions from patients. The tweets are mostly to promote psoraisis awareness.

Benchmarking Social Media in the Pharma Industry
In a benchmarking survey conducted by IBM in early 2011, eight hundred sales and marketing managers (including 88 from pharma companies) were surveyed, providing information about their organizations’ key practices and performance indicators. Statistical analysis of the data revealed that pharma is lagging behind other industries in its use of social media. (see Figure below) 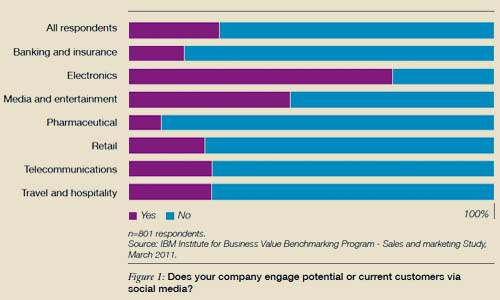 How to Get It Right
But with governance in place, says IBM, the pharma industry can get it “right” and use social media to: