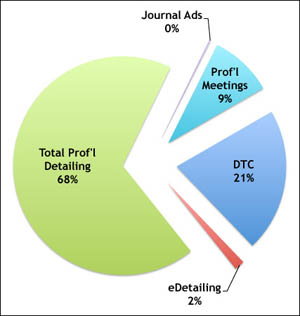 According to the latest Cegedim Strategic Data (CSD) Audit, the 20 pharma companies that spent the most on total promotion — which includes traditional professional detailing, eDetailing, Direct-to-Consumer (DTC) advertising, professional meetings, and journal advertising — spent a total of $14,784 Bn in 2013.

How representative is this of the entire industry? It’s difficult to say. According to CSD, the Top 20 pharma companies spent $10.1 Bn on professional detailing in 2013, which is about 70% of the $14.9 Bn CSD estimated the entire industry spent on professional detailing in 2012. On the DTC side, the Top 20 spent $3.2 Bn, which is about 85% of the total of the $3.8 Bn total 2013 DTC spend according to Nielsen data. Based on these numbers, it seems fair to say the allocation of the promotional spend — i.e., the portion of the spending pie devoted to each category — of the Top 20 spenders is representative of the industry as a whole.