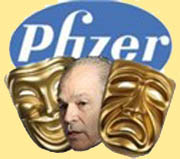 From the very beginning I thought Jarvik was a “fop” (see “Lipitor’s Jarvik: Fop or Flop?“). I criticized the color scheme chosen for his clothes,

which was Nexium purple rather than Lipitor blue. That may have been a branding faux pas or perhaps something the good doctor demanded. At first, I thought this was the wrong image to project of a cardiologist. But maybe a “softer” doctor image, someone with caring eyes and a soft voice, appealed more to a certain audience. Perhaps focus groups showed that Jarvik rated very high among women. That would be important because women may be under-medicated for control of their cholesterol levels compared to men.

Recently, even Jarvik’s former colleagues have come out publicly to question whether his contribution to medical science was all that great.

A February 26, 2008 New York Times article reported that three former colleagues of Dr. Jarvik’s at the University of Utah complained to Pfizer that the Lipitor ads erroneously identified Dr. Jarvik as “inventor of the artificial heart.” That distinction, they said, should go to Dr. Jarvik’s mentor, Dr. Willem J. Kolff, and his associate, Dr. Tetsuzo Akutsu. Pfizer subsequently changed its ads to identify Dr. Jarvik as the inventor of the “Jarvik artificial heart.”

Worse was yet to come. We learned that Jarvik did not have a license to practice medicine! (See “Jarvik-Lipitor spokesperson-‘outed’ as an unlicensed physician!”). Even veteran DTC expert Bob Ehrlich, publisher of DTC Perspectives, beieved that Jarvik was a practicing cardiologist. Although Ehrlich did not think the ruse was a big deal, the House Energy and Commerce Committee obviously did–it raised questions about Dr. Jarvik’s credentials to recommend Lipitor.

After that debacle, it was clear that Pfizer could not allow Jarvik to testify before Congress, which was-and maybe still is-itching to have him as a witness. He simply had to go and Pfizer came out with a mea culpa (see press release).

“The way in which we presented Dr. Jarvik in these ads has, unfortunately, led to misimpressions and distractions…” said Ian Read, Pfizer’s president of worldwide pharmaceutical operations.”We regret this,” he added.

Not only did the ads mislead viewers to believe that Jarvik was a practicing cardiologist, they also falsely depicted Jarvik as an expert rower! “He can’t row,” said Dr. O. H. Frazier of the Texas Heart Institute of Dr. Jarvik. And Dr. Frazier should know-he’s a “longtime collaborator” of Jarvik’s! As reported in the NY Times, the Energy and Commerce Committee also “asked 10 advertising agencies that worked on the Dr. Jarvik campaign to submit documents about the use of body doubles.”

In his defense, Jarvik said: “I spent most of my summer vacation time during high school on the water, sailing, rowing, fishing, and scuba diving. At the time the ad was filmed, I was certainly fit enough to row for the shoot.” (See WSJ Health Blog).

Finally, we learned that Jarvik didn’t start taking Lipitor until after he was hired by Pfizer. It’s one thing to make snarky remarks about Jarvik’s mannerisms, but let’s not forget that the fire behind all this smoke is how Pfizer and the Kaplan Thaler Group, its ad agency, mismanaged the whole Jarvik-Lipitor campaign and the press.

All I can say is that it may be a long time before any other celebrity will work with these dodos! Unless, of course, Pfizer raises the ante and offers $2 million to the next rope-a-dope celeb!