Medication non-adherence is one of the most significant problems in healthcare. It is responsible for an astonishing number of poor outcomes and, as a result, an estimated $290 billion in otherwise avoidable medical spending in the US per year. It is also responsible for over $150 billion in lost pharmaceutical revenues per year. Up to 25% of prescriptions are never filled, and average medication compliance, for people who do fill their prescriptions, is only about 50% for most chronic diseases.

HealthPrize is an internet-based software company that motivates people to initiate and to stick with their prescription medications by offering a unique and comprehensive combination of financial rewards, fun, education, and reminders. Its patented “Engagement Engine” draws on lessons learned in behavioral economics and consumer marketing.

While the incentives (in the form of rewards points, sweepstakes, and competitions) serve as a compelling “hook,” or extrinsic motivator designed to maximize opt-in rates and loyalty over time, targeted and repeated education is also seamlessly incorporated into the solution in order to build and strengthen a consumer’s intrinsic motivation to remain compliant.

Traditional adherence tactics are clearly insufficient. Approaches such as simple reminder devices or reminder services, one-time educational interventions, phone calls from nurses, and co-pay reductions can boost short-term compliance for the narrow band of consumers who opt-in, but they all suffer from one or more serious shortcomings: they’re boring, they’re hard to scale or to repeat, they address only one selected reason for non-adherence, and they’re insufficiently motivating over the long term.

Virtually any intervention will boost compliance in a carefully controlled trial over the short term, but most programs end up preaching to the choir when rolled out into the real world, attracting those already reasonably adherent. There’s limited ROI in such approaches, and limited prospects for improved outcomes.

HealthPrize was designed to appeal to a much broader band of consumers, and to fundamentally enhance the value proposition involved in the act of taking a chronic medication. Although the promise of good health should be enough of a reward, for many real people in the real world it simply isn’t, and that’s where HealthPrize adds real value. 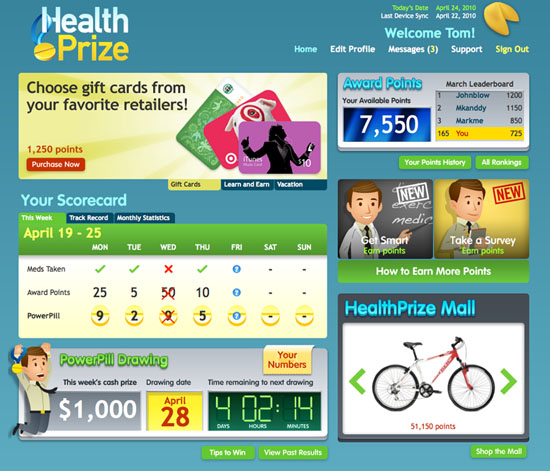 Tom Kottler is co-founder and CEO of HealthPrize, the fourth start-up venture he has founded or been associated with as part of the initial management team. Tom’s first start-up is called MedAptus, a healthcare IT company in Boston that creates and sells software systems for physician practice groups. After leaving MedAptus, Tom joined the management team of Celadon Science, a venture developing cell-based wound care technology with technology licensed from the cell biology department at the Harvard Medical School. Tom’s third venture is called VeinAid, which is developing non-invasive medical technology to treat varicose veins, and is based on patents with Tom as named inventor.

Prior to becoming an entrepreneur, Tom spent nine years in private legal practice with firms in Chicago and Connecticut. He received a BS from Middlebury College and a JD from George Washington University.

Katrina S. Firlik, M.D. is co-founder and Chief Medical Officer of HealthPrize Technologies. Before founding HealthPrize, Katrina was a neurosurgeon in private practice at Greenwich Hospital in Greenwich, Connecticut, and on the clinical faculty at Yale University School of Medicine.

In addition to her numerous scientific publications, Katrina is the author of Another Day in the Frontal Lobe: A Brain Surgeon Exposes Life on the Inside, published by Random House and reviewed by The New York Times, The Los Angeles Times, and O Magazine. She enjoys conveying medical concepts to the public and has appeared on CNN, Fox, and MSNBC as a commentator on a variety of medical issues. She is also an inventor of a brain stimulation device designed to enhance recovery after stroke.

Katrina did her undergraduate studies at Cornell University, with a major in cultural anthropology. She attended medical school at Case Western Reserve University, and did her neurosurgery residency at the University of Pittsburgh, one the largest neurosurgery centers in the country, where she was the first woman ever accepted to the program. Katrina also completed a specialty fellowship in epilepsy surgery at Yale University.

Beyond Compliance: Strategic Implications of the Physician Payments Sunshine Act