As reported by Nielsen, direct-to-consumer (DTC) advertising spending by the pharmaceutical industry was down by 1% compared to 2010. I used that bit of information to update my chart of DTC spending trend over the years (see below). 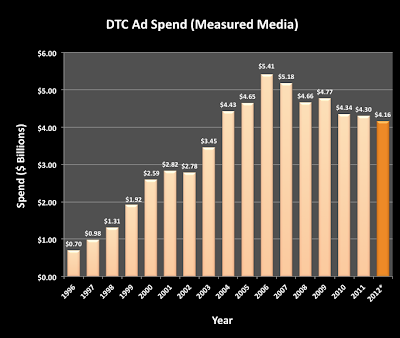 This chart actually plots measured media data (excluding Internet display and search advertising) through 2010 from AdAge, which got the data from TNS Health. I calculated the 2011 total based on the 1% decrease reported by Nielsen (sorry, I don’t have TNS data for 2011).

The final bar of the chart is my estimate for 2012, which is based on the premise that DTC ad spending for Lipitor will be less than half of what it was in 2011. Of course, Lipitor is now available in generic form, so we would expect Pfizer to spend less on its advertising. However, for the first 6 months or so in 2012, Pfizer will continue to spend money on advertising its $4 co-pay coupon for branded Lipitor. But after that, I expect spending to drop precipitously.

I did a little exercise to predict that DTC spending in 2012 will see a further 3% decrease compared to 2011 solely due to an expected drop in Lipitor advertising. Here’s how I came up with that estimate. 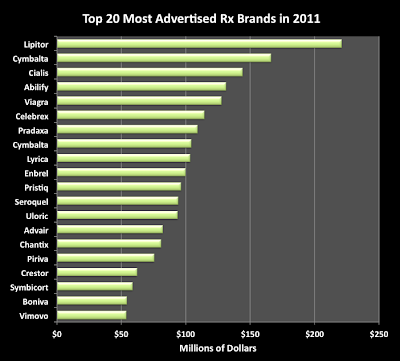 Based on what I said above and a poll of readers (see here), I estimate that Pfizer will spend less than $100 million (ie, $90 million) on Lipitor DTC in 2012. If we assume everything else remains the same, that decrease of $130 million represents a 3.3% decrease in overall DTC spending!

Of course, not everything else will “remain the same.” Other drugs may come on the market that may be have substantial DTC advertising budgets. But I don’t think that is likely — more and more drugs in the TOP 20 list will be coming off patent.

In any case, this is just a little thought exercise that demonstrates how much a SINGLE drug can impact the overall DTC spending trend. Not only that, but a single drug company — Pfizer — accounts for nearly one-quarter (22.3%) of the total (see chart below)! Seven of the TOP 20 drugs are marketed by Pfizer. 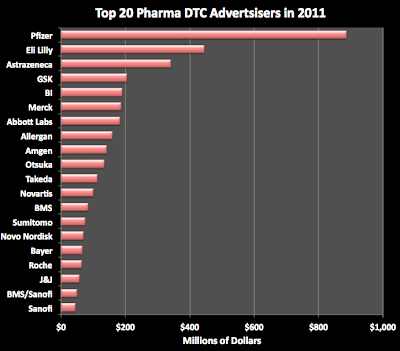 One of the TOP 20 advertised Pfizer drugs is VIAGRA. Currently, it appears that Pfizer is focusing on the counterfeit Viagra problem to bring in web visitors to viagra.com (see display ad on left).

Another TOP 20 advertised Pfizer drug is ENBREL. Pfizer & Amgen spent nearly $100 million on Enbrel DTC advertising in 2011 (compared to $71 million in 2010). And this number does NOT include what the Amgen/Pfizer has paid Phil Mickelson to be the Enbrel celebrity spokesperson (see “Amgen Blows Its Marketing Budget on Phil Mickelson Campaign” for more on that). On TV, Mickelson promotes Enbrel for the treatment of his psoriatic arthritis. According to the MM&M article cited above, psoriatic arthritis afflicts “around one in 20 of the 2% of Americans who suffer from psoriasis.” That works out to be 375,000 people (1 in 20 of 7.5 million).

Approximately 63 cents out of every DTC ad dollar goes to TV. So, Pfizer/Amgen spend about $63 million to reach 375,000 people via TV ads! It seems a bit exorbitant to spend so much for broadcasting versus a more targeted approach. Anyway, that’s the crazy world of Pharma DTC advertising! Go figure.

Making Sense of Multichannel Marketing: Towards Achieving the “Holy Grail” of...