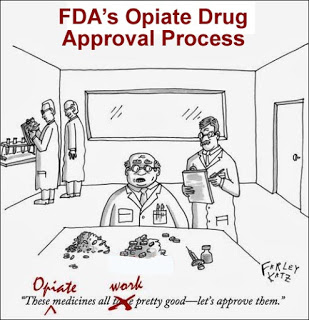 The FDA has made many efforts to deal with the current opioid addiction crisis. The latest is the establishment of a “Opioid Policy Steering Committee.” Some of these efforts may have been compromised by the influence of patient advocacy groups sponsored by drug companies that produce and market opioids. Such groups have gotten a seat on FDA panels. So, one has to wonder who will be named to the new steering committee.

Listen to podcast below:

Read the transcript, which includes links to more information, below.

If the current opiate addiction epidemic were a play, the Food and Dug Administration (aka FDA) would be both the villain and the hero and the play would be a tragic-comedy.

We all know drug addiction is a tragedy. But many experts, including David Kessler, former FDA Commissioner, believe the FDA is partly to blame because it did not warn doctors and patients about the high risk of opioid addiction when treating pain (read “Former FDA Commish Kessler Slams Docs, #FDA for Opioid Epidemic“).

Also, the FDA has been criticized for approving more new opiate painkillers despite the warnings of abuse potential from consumer groups. In 2015, the FDA approved OxyContin for children without first convening an expert advisory panel, as the agency often does. The agency approved Zohydro, “an opioid so powerful that a single dose could kill a child,” according to Public Citizen (read “Why the FDA Approved Zohydro” and here). Robert Califf, the FDA Commissioner at the time, had ties to the drug industry, including companies that make opioids.

So it’s a bit comical that Scott Gottlieb, the newly-appointed FDA Commissioner, said in a recent blog post that he “believes the Food and Drug Administration continues to have an important role to play in addressing this crisis” (read “FDA Commissioner Asks Staff for ‘More Forceful Steps’ to Stem the Opioid Crisis“).

Gottlieb inherited the problem, so I want to give him the benefit of the doubt. He has established an “Opioid Policy Steering Committee” as the first step in his plan to address the problem. The important question, however, is who will be appointed to that committee. In the past, FDA’s attempts to get input from the public and experts have been compromised by conflicts of interest.

Senator Ron Wyden from Oregon, for example, complained to HHS Secretary Tom Price about apparent financial relationships between opioid manufacturers and pain advocacy groups participating in a recent FDA “Safe Use of Opioids” public workshop. In particular, noted STATnews, Wyden was worried about the influence of groups such as the American Academy of Integrative Pain Management, which is heavily funded by opioid makers such Mallinckrodt and Purdue (read “Experts with Links to #Pharma Dis-Invited to Join #FDA Painkiller Panel” and “Federal Pain Panel That Bashed Anti-Oxycontin Over Rx Plan, Rife with Links to #pharma“).

Recall that in 2007, Purdue pleaded guilty to charges that it misled doctors and patients about OxyContin’s potential for addiction. The company was ordered to pay $600 million in fines (read “The History of Purdue’s Marketing of Oxycontin & Its Connection to the Opiate Epidemic”).

Another problem the FDA has in fighting opioid addiction is its lack of jurisdiction over physician prescribing habits once it approves drugs for marketing. Physicians are free to prescribe as they see fit. Only 40% of opioid-prescribing physicians have been trained on how to safely prescribe these medications primarily because training programs are voluntary, not mandatory (see here).

Clearly, the FDA has a lot of hurdles to overcome in its effort to stem the opioid crisis it helped to create! And it doesn’t help that Trump’s proposed Medicaid cuts will negatively impact funding for drug rehab treatment.

Pharma Agency Awards for Web 1.0, None for Blogs or Other...