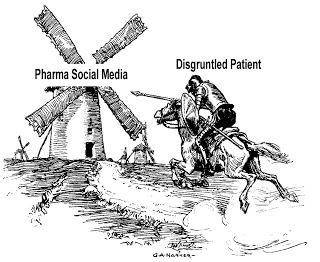 “I actually think i did a very good job in closing down the FB page of Europes largest drugs company, something i am very proud of and something i havent finished with yet,” said Shirley Ledlie in a comment made to Social Media Intern‘s “Ask Me a Question” survey.

In a quick visit to the VOICES page, I found that all the posts to the Wall had been deleted and have been replaced by this statement: “sanofi-aventis VOICES has no recent posts.” No further comments can be posted to the VOICES Wall. It appears that S-A could not stand up to the onslaught waged by Ledlie’s solitary “voice” and just decided to call it quits!

A precedent has been set by this experience, which does not bode well for the future of pharma social media.

“So you think it was terrible what i did to SA facebook page do you?,” said Ms. Ledlie to Social Media Intern (SMI), who actually expressed no opinion on the matter. “Well you should try living with the disfiguration they have caused me! Thats terrible.

“You want transparancy? so do i,” continued Ms Ledlie. “I want SA to be transparent with the data they recieve. If you think SA did such a bad job with FB maybe you should contact Madeline Malia, the director of communication for SA. You can tell her what a rubbish job she did dealing with my FB attack.

“Maybe you could use my skills in finding the weaknesses,” finished Ledlie in her comments to Social Media Intern.

“I have no idea why Ms. Ledlie thinks I think what she is doing to S-A is terrible,” said SMI in a personal communication. “But I welcome her quixotic campaign for pharma transparency. All she has achieved, however, is a complete blackout!”

UPDATE: S-A has re-opened its FB Wall page for posting: Sanofi-Aventis Updates FB Site with Disclaimer, But Shirley Still Posting About Her Side Effects.

Quality Healthcare Social Media: Separating the Wheat from the Chaff