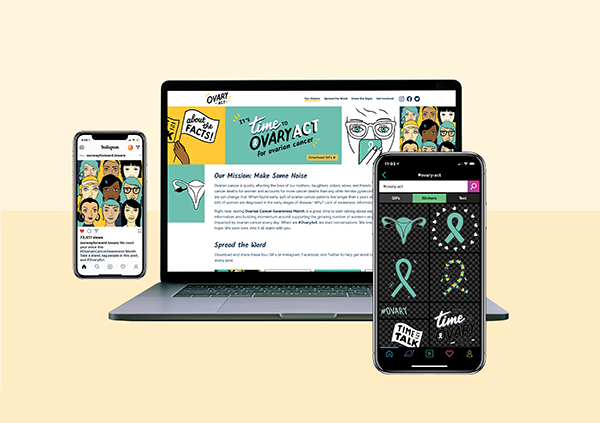 Ovarian cancer is a devastating disease, with the lowest survival rate of gynecologic cancers, striking and killing women of all ages and ethnicities. Yet there is a lack of education and awareness, as well as research funding. Unfortunately, women often ignore or misread symptoms until it’s too late.

Could a pharmaceutical company’s awareness campaign help to make a difference?

During Ovarian Cancer Awareness Month in September 2019, the #OvaryAct campaign from Intouch and GSK Oncology (formerly TESARO) empowered advocacy groups, patients, and caregivers throughout the ovarian cancer community with beautifully designed social assets to get vocal and spread the word about ovarian cancer. And did they ever.

GSK Oncology had worked to personally connect with women impacted by ovarian cancer, finding a community that is profoundly motivated, supportive, passionate, and positive – seeking to help each other, and help make sure others don’t have to go through the same experience they have.

But while listening to these experiences, it also became clear that there are many common myths associated with ovarian cancer detection and diagnosis – myths that have hindered detection and treatment, and have cost lives.

We knew that this community was a powerful force, and that the public needed to become better informed. And we knew that both the community and our target audience, including patients and their caregivers, were likely to share information and visual content on social channels, particularly about health and wellness topics; and to trust social influencers when it comes to health information.

While advocacy organizations were doing extremely important work, we believed that unifying these disparate voices to create one rallying cry across social channels could allow awareness to be spread much further and faster. Our job was to convert and broadcast the energy of the community into broader awareness.

So Intouch and GSK Oncology set out to develop a nonbranded awareness campaign that would speak with the voice of women in the community – or, rather, let them speak with their own voices. We sought to reach women to encourage awareness, understanding, and dialogue about the importance of education and early detection in ovarian cancer. The goal was to spread facts and debunk myths associated with ovarian-cancer detection and diagnosis – proving that when we #OvaryAct, we start conversations, break barriers, spark hope, and save lives.

“The community made our choices for us,” Stefanie Nacar, head of US oncology communications for GSK, told Med Ad News. “If ever a campaign grew up from the grass roots, this was the one. The women of the ovarian cancer advocacy community are on social media, so social media would be our channel. They are of all different ages, ethnicities, and backgrounds, so the beauty of all that diversity would be reflected in the creative visuals of the campaign. And many of them are frustrated – frustrated that they’d misunderstood their symptoms or didn’t take them seriously sooner than they did. And they wanted the next woman with nagging bloating or loss of appetite or pelvic pressure or low energy to act. So, ‘OvaryAct’. It was perfect.” 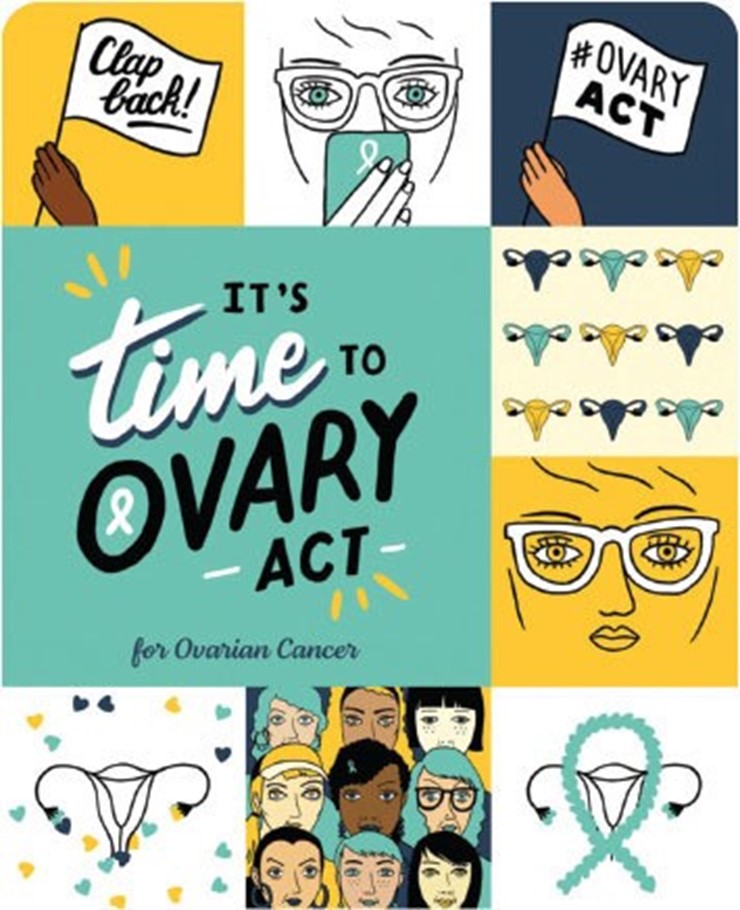 “And we wanted to take a positive approach,” Stefanie added. “A great deal of the awareness material that had circulated in the past during Ovarian Cancer Awareness Month had been focused on the disease; epidemiology, number of people impacted, low survival rates. A lot of shock and awe, in other words. That’s not the sort of approach that encourages engagement and sharing – or hope, for that matter. So, we took a positive, hopeful and fun approach with the imagery and messaging.”

This groundbreaking campaign was the first by a pharmaceutical company to engage in a promotional media partnership with GIPHY. GIPHY is a channel with a tremendous amount of reach and frequency, where users are encouraged to personalize their own content and use others’ content in the form of GIF images and animations. Pharma brands haven’t used it – and in fact might be seen as self-serving if they did. But for a nonbranded campaign focused on the patients and the relationships they have with each other, it was just right. The GIPHY handle allowed users to take GIFs, stickers, and other graphics (designed by an illustrator noted for creating assets for Taylor Swift), and share them via SMS, Instagram Stories, TikTok, and other emerging platforms where target audience members engage and interact.

Notable advocacy organizations in the ovarian cancer space, as well as women who had already been affected by ovarian cancer and their caregivers, helped to spread the word without even being asked to do so. The #OvaryAct movement was born.

Its success speaks to the power of the GIF – and, moreover, to the power of straightforward, authentic communication in healthcare. In just one month, the #OvaryAct campaign garnered over 2M engagements on social media and 12.5M+ impressions. Patients and caregivers saw themselves in it, spoke out through it, and wanted it to spread.

There’s a time and a place to #OvaryAct, and this patient community helped us see how we could best help them to do so.