A Pharma Social Media Conspiracy Theory Were Guidelines Held Hostage as Part if FDA’s and DOJ’s Criminal Investigation of Google?
By John Mack 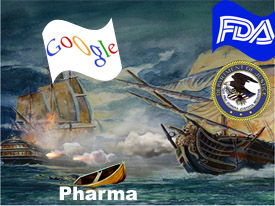 All the 14 were “issued about a single topic — online advertisements,” noted Mark Senak on EyeOnFDA Blog (here). “Each of the advertisements were sponsored links that appeared on search engine results pages. A sponsored link is a short ad with a web link to a product. What does the issuance of an entitled letter by DDMAC based on sponsored link ads mean for pharma and the use of the Internet for marketing?”

After looking more deeply into what’s really behind the news about Google’s advertising policies, online pharmacies, and FDA’s 2009 warning letters to major pharmaceutical companies, I’m thinking that drug industry search engine ads (ie, Google Adwords) were “collateral damage” in a war between Google and the FDA/Department of Justice.

On May 12, 2011, the Wall Street Journal reported that Google is “close to settling a U.S. criminal investigation into allegations it made hundreds of millions of dollars by accepting ads from online pharmacies that break U.S. laws” (see “Google Accepted Ads from Illegal Online Drug Stores“).

Not so coincidentally, a few days before, Google disclosed that it was setting aside $500 million to potentially resolve a case with the Justice Department (DOJ) that involved “the use of Google advertising by certain advertisers.”

“The investigation has examined whether Google knowingly accepted ads from online pharmacies, based in Canada and elsewhere, that violated U.S. laws,” said the WSJ article.

The FDA has long struggled to rein in American’s penchant for buying drugs from online Canadian pharmacies and this investigation of Google by DOJ is likely part of that effort. In fact, FDA agents participated a sting operation against Google (see “FDA, DOJ, & Google: Conspiracy Theory, Part 2”, below). Caught up in the case may have been legitimate major pharmaceutical companies as well.

Consider FDA’s infamous 14 warning letters that the agency mysteriously sent in a single day in March, 2009, to major pharmaceutical companies about Google Rx Adwords, saying the ads were misleading because they didn’t include risk information (see “FDA Warns Drug Firms Over Internet Ads“).

Could that have been a “ploy” to bring Google to its knees and cave in regarding online pharmacy ads?

In other words, the FDA’s warning letters may have been a “shot across Google’s bow,” intended to force Google to halt its acceptance of ads from “illegal” online pharmacies. FDA could have been saying, “What’s more important to you? Ads from online pharmacies or ads from major pharmaceutical companies?”

In addition, FDA could have been holding back issuing pharma social media guidelines — which would include guidelines for displayig compliant information in space-limited applications such as Twitter AND Google Adwords — until Google settled its case with the DOJ regarding illegal online pharmacy ads. Most likely, it’s just ONE of many reasons why we haven’t seen the guidelines in a timely fashion. 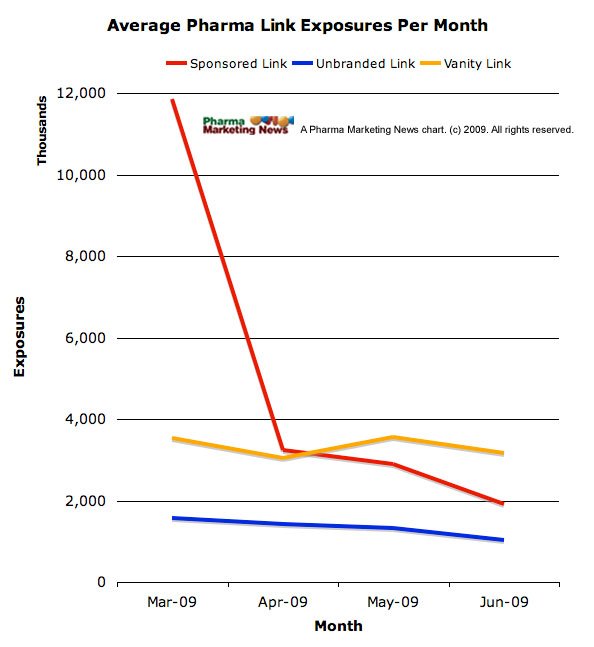 It’s likely that this case goes way back because in September 2010, Google disclosed that it had filed a lawsuit against “advertisers we believe have deliberately broken our rules.” Google in particular cited “rogue online pharmacies” that “illegally sell drugs on the Web” (see “Google’s $500M Charge Related To Pharma Advertising Probe“).

In June 2010, it was reported that Google launched a NEW Rx drug ad format that includes everything FDA requires that a drug company include in its direct-to-consumer advertising: fair balance, and direct links to side effects, precautions, dietary information, etc. (see “Finally, A Google Drug Search Ad Format That Has All FDA Could Want… But Pharma Can’t Use It!“). The “ads” are really more like public service announcements. They come from the National Institutes of Health (NIH) and compete with paid ads from pharmaceutical companies who cannot use the new format (see “Google’s New OneBox Rx ‘Ads’ Steal Clicks from Organic Branded Rx Search Results“).

To compensate for that deficiency, Google also has come up with a new ad format for the industry (see “Is Google the New FDA?“).

All of these actions by Google could be designed to appease FDA and DOJ and regain the drug industry’s ad revenue lost as a result of FDA’s warning letters way back in 2009.

I suggested above that the FDA’s infamous 14 warning letters sent to major pharma companies regarding violative search engine ads may have been a “shot across Googles bow,” intended to force Google to halt its acceptance of ads from “illegal” online pharmacies.

Many people did not take my “conspiracy theory” seriously. Some pooh-poohed my suggestion that the FDA was involved. One commenter to Pharma Marketing Blog said “OMG… what a stretch…I’m sure they are laughing at you at FDA.”

It turns out that the FDA WAS INVOLVED in the criminal investigation of Google by the Department of Justice (DOJ).

On May 21, 2011, the Wall Street Journal reported that “as part of the criminal investigation, undercover agents for the Food and Drug Administration contacted Google posing as representatives from rogue Internet pharmacies” (my emphasis; see “Google Was Warned Repeatedly About Illegal Drug Ads“).

Even if though the FDA was involved in the sting operation, my “conspiracy theory” would not hold water UNLESS the investigation of Google preceded the issuance of FDA’s warning letters at the end of March, 2009. The WSJ article confirms this to be true.

The period 2008-2009 saw a lot of activity related to this investigation, according to documents reviewed by the WSJ. Here are some key actions during that period reported by the WSJ:

“In July 2008, the National Center on Addiction and Substance Abuse at Columbia University (CASA) wrote to Eric Schmidt, then Google’s chief executive, saying it found ‘prominent displays of ads for rogue Internet pharmacies’ in a Google search for controlled drugs.”

In December, 2008, the National Association of Boards of Pharmacy, or NABP, a group representing state regulators in the U.S. and Canada, wrote letters to Google “warning about advertising from online drug outlets that weren’t verified by a NABP screening program. The organization was ‘deeply concerned that these rogue Internet sites could be a front for criminals seeking to introduce adulterated medications, counterfeit drugs, or worse, to the American market,’ wrote Mary Dickson, the NABP’s associate executive director. The NABP says Google didn’t respond.”

Google DIDN’T RESPOND?! That suggests Google needed convincing. What better way to get Google to respond than by sending out 14 warning letters to its BEST clients, effectively shutting down Google’s legitimate drug ad revenue?

“‘On the basis of our analysis, I think they were turning a blind-eye,’ said Bryan Liang, a California Western School of Law professor who published a 2009 report that found Google and others were profiting from online ads paid for by illegal drug sellers. ‘They were making a lot of money on this.'”

“In 2009, LegitScript LLC, which monitors online drug sellers, published reports alleging that 80% and 90% of Yahoo and Microsoft’s respective online drug advertisers were breaking the law.”

“John Horton, who runs LegitScript, said his company also conducted in 2009 an unpublished review of Google’s ads and found the same level of problems. LegitScript is now employed by Google to help identify problem sites, he said.”

“PharmacyChecker [the third-party company that Google hired to verify that online pharmacy advertisers were legal] said it received a subpoena from the FDA in 2009 to produce all its communications with Google regarding pharmacy verification policies.”

It is clear that the FDA and DOJ were investigating Google long before the FDA sent those March, 2009, letters.

Some of the reports and activities described above happened AFTER FDA sent the letters  (eg, the LegitScript report was published in August, 2009; see here). No doubt these reports were published due to the light the FDA letters shone on Google’s drug ad policies. IMHO, the letters not only impacted Google’s revenue, they also elicited further data from third-parties to bolster the DOJ’s case against Google.