Antidepressants: Top Advertised & 3rd Most Commonly Used Rx Drug According to a recent CDC Data Brief (find it here), antidepressants were the third most common prescription drug taken by Americans of all ages in 2005-2008 and the most frequently used by persons aged 18-44 years. From 1988-1994 through 2005-2008, the rate of antidepressant use in the United States among all ages increased nearly 400%.

Here’s a chart that breaks it down by age group and males vs. females: 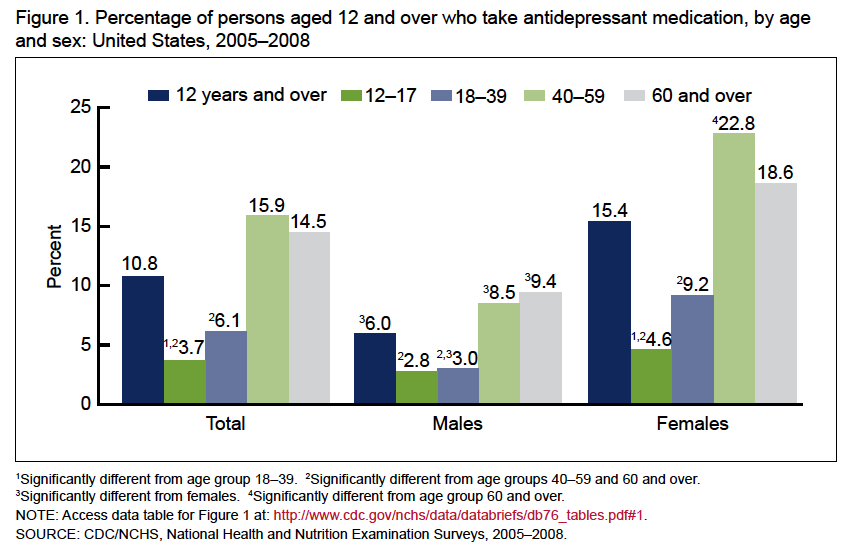 Perhaps not so coincidentally, antidepressants are among the TOP advertised Rx category in 2010, according to the recent AdAge analysis I summarized in a previous post (see “Double Dip in DTC Spending Plus 33% Drop in Internet Display Ad Spending!” and pie chart below).

Of the TOP 25 advertised drugs in 2010, DTC ad spends for antidepressants was 20% of the total (24% if you include Lyrica, which is not indicated for depression but is often prescribed for depression off-label).

The CDC data covers the time period 2005-2008, which is somewhat prior to when the full effects of the recession were felt by the recently unemployed.

Why are proportionately more women taking antidepressants than men? The CDC News brief doesn’t say, but news reporters have suggested that more women are caregivers and therefore subject to depression linked to that.

Or could it be the DTC advertising of antidepressants that lead more women to ask their doctors about antidepressants (see, for example, “Women Need More Love, Less Drugs“)?

Actually, practically every DTC ad (except ads for Viagra) “speaks” to women — the ads most often focus on the woman as the sufferer of the indicated condition or the caregiver.

This is part of an issue that I will discuss with several experts in an upcoming LIVE podcast titled “How to Score With Women (as a Marketer) via Social Media.” One question I’d like to ask the experts is this: Do pharma marketers focus on women because they are the majority of the audience or because they buy more products (including drugs) than men (ie, are more prolific consumers than are men)? I tend to favor the latter over the former. What do you think?

Originally posted to Pharma Marketing Blog (here) on 24 October 2011. Find comments to this post there.