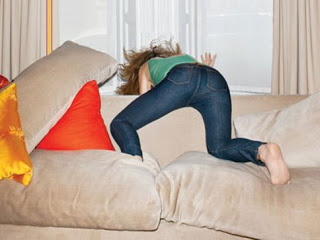 The AdWeek article “ChapStick Gets Itself in a Social Media Death Spiral” caught my attention yesterday. It describes how Pfizer mishandled negative comments about a Chapstick ad image posted on its Chapstick Facebook page. Here’s the play-by-play of the “death spiral” as reported by AdWeek:

“ChapStick posts weird image on Facebook of a woman, ass in the air [see photo at left], looking for her ChapStick behind a couch. Blogger is disgusted, blogs about it. Blogger tries to reply on Facebook too. ChapStick deletes her comments. Others object to the image. ChapStick deletes their comments. ChapStick’s ads with the line “Be heard at Facebook.com/ChapStick” start to look foolish. People keep commenting. ChapStick keeps deleting. People get angry. ChapStick gets worried. The image isn’t even that big of a deal—it’s ChapStick’s reaction to the criticism that galls. ‘What asses,’ people say of ChapStick (get it?). People start commenting about why they can’t see their old comments. ChapStick can’t keep up with all the deleting. Comments are getting through, and they’re nasty.”

Eventually, Pfizer apologized (sort of). The official Pfizer Twitter account (@pfizer_news) said: “The ChapStick ad was not intended to offend anyone & we R pulling it ASAP. Thank you to our ChapStick fans for providing this feedback”. It also apologized on Facebook:

“We see that not everyone likes our new ad, and please know that we certainly didn’t mean to offend anyone!” the post says. “Our fans and their voices are at the heart of our new advertising campaign, but we know we don’t always get it right. We’ve removed the image and will share a newer ad with our fans soon!”

But then, says AdWeek, there’s this “very strange” second paragraph: “We apologize that fans have felt like their posts are being deleted and while we never intend to pull anyone’s comments off our wall, we do comply with Facebook guidelines and remove posts that use foul language, have repetitive messaging, those that are considered spam-like (multiple posts from a person within a short period of time) and are menacing to fans and employees.”

I emphasized “have repetitive messaging” and “those that are considered spam-like.” “Repetitive” and “spam-like” are pretty subjective terms that can be interpreted differently by different people. I wonder if this comment moderation policy can be found in Pfizer’s secretive social media “playbook” (for more on that, see here).

Obviously, this moderation policy can be used selectively to allow only positive posts such as these “repetitive” messages currently found on Chapstick’s FB page: “I ALWAYS have Chapstick with me everywhere I go.”, “ChapStick is an everday part of me:)”, “Chapstick and my lips are bffs.”, “i always have one in my pocket!”, “I LOVE CHAP STICK”.

But it’s not Pfizer’s moderation policy that Chapstick consumers originally complained about. It’s the image of a “woman, ass in the air” that compelled this sort of comment:

“Have we really become so desensitized as women that we just ACCEPT that our bodies are used as props to sell products? That women in sexually suggestive poses and naked women (google “Chapstick and Amanda Ware”) are being used to sell LIP BALM? That we just look the other way and say “eh, what’s the problem?” There is a problem. A big one. By sitting on the sidelines and being ok with such images, you essentially give a thumbs up to the overt sexualization of women in the media. Look around. Pay attention. If that was your daughter’s rear end showcased for all the world to see, how would you feel about it? — Tasha Burwinkle Murphy (Redmond, WA).”

Of course, not all women commenters agree:

“People have too much time on their hands if they are worried (and harassing) a company for a silly ad like this. There is NOTHING offensive about it, unless someone is looking to make something offensive out of it.” — Nicole Leigh (Chalfont, PA)

There’s a long-standing tradition of using women in ads — including most direct-to-consumer (DTC) Rx drug ads. I’ve pointed this out many times here on Pharma Marketing Blog (most recently here and here). Until social media, however, women haven’t been able to submit comments directly to advertisers about offensive ads. And women are VERY important when it comes to social media marketing and communications.

Women and Social Media
According to a Pew Research Center Internet & American Life Project survey (see here), “Young adult women ages 18-29 are the power users of social networking; fully 89% of those who are online use the sites overall and 69% do so on an average day. Looking more closely at gender differences, women have been significantly more likely to use social networking sites than men since 2009′ (see chart below). 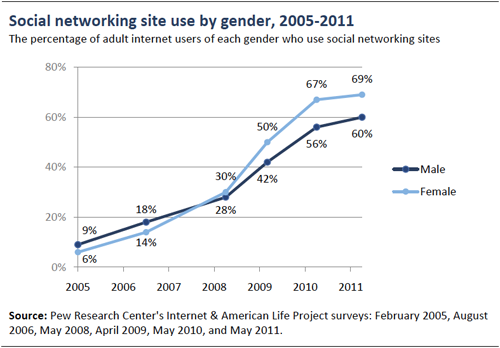 How can marketers better communicate with women via social media? That’s a topic that I will explore in an upcoming Pharma Marketing Talk LIVE podcast: “How to Score With Women (as a Marketer) via Social Media.” I invite you to participate and/or listen live or listen to the podcast archive afterward (here). You can also participate in the ongoing Twitter discussion using the hash tag #SMXFactor.