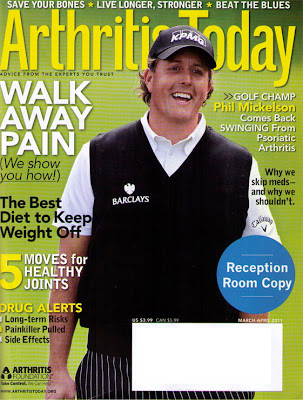 The Phil Mickelson Enbrel Campaign From the Audition in the Press to TV, Web, and Print Advertising

In August, 2010, just after the golf world was stunned by Tiger Woods’ poor performance following infidelity revelations, another bit of “stunning” news hit the golf world when the #2 ranked duffer Phil Mickelson announced that he suffers from Psoriatic Arthritis and is being treated with Enbrel. See “Phil Mickelson Arthritis: Will Play At PGA Whistling Straights“. [As of December, 2011, this story is still available on the Web.]

The New York Times also ran a story: “Immune Disorder Could Be an Enduring Test for Mickelson“.

Both these articles mentioned that Mickelson was being treated with Enbrel, a drug jointly marketed by AMGEN & PFIZER. The first article I cited includes the subtitle “PGA Championship 2010, Whistling Straits: Phil Mickelson Has Psoriatic Arthritis – Uses Enbrel To Help Manage Condition” and includes this quote from Phil: “I have no aches and pains. My back feels great. I feel stronger and more flexible than I’ve ever been.”

At the time, this was quite an “unsolicited” celebrity endorsement! Amgen/Pfizer could never quote what Phil said on its Enbrel website as in the following completely fabricated screen shot: 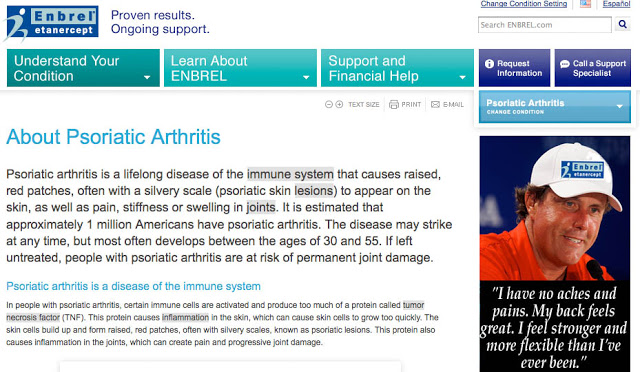 The New York Times helped Enbrel’s cause by supplying the following dire statistics about this medical condition: “As many as 7.5 million people in the United States have psoriasis, according to the National Psoriasis Foundation, and about 30 percent of those with psoriasis develop psoriatic arthritis. While psoriasis often appears between the ages of 15 and 25, the arthritis symptoms usually appear later, often between 30 and 50. When it does, there is no rhyme or reason as to which joints will hurt at any given time.”

Did this bit of information came straight from AMGEN/PFIZER’s PR people?

It probably did NOT come from the “nonprofit Psoriasis Cure Now” group, which issued a press release entitled “Phil Mickelson’s Arthritis Shocks Golf World, Psoriasis Cure Now Says a Reminder That Psoriatic Arthritis Is a Serious Disease.” That group, which includes Amgen and Pfizer as sponsors, claimed ONLY 1 million people (less than half the number cited in the NYT article) in the U.S. have psoriatic arthritis. “… cases range from mild to what Phil Mickelson described this week. Fortunately, the man on the edge of being ranked the world’s number one golfer is taking Enbrel, a biologic treatment that has transformed the lives of many people with psoriasis, psoriatic arthritis, rheumatoid arthritis and other immune system diseases.”

At the time of these PR events, Mickelson may or may not have been in talks with AMGEN/PFIZER to sign on as a celebrity spokesperson, but the simultaneous appearance of multiple news stories featuring Mickelson & ENBREL sure looked like an audition to show AMGEN/PFIZER what he could do for them.

Mickelson is now a paid, fully branded spokesperson for ENBREL and is featured prominently on the Enbrel Web site, on TV, and in third-party publications such as Arthritis Today (see below).

During the 2011 Masters Tournament, Mickelson finished tied for 27th place! Consequently, we didn’t see much of him hitting a golf ball during the televised broadcast of that event. However, he was seen often on TV ads for ENBREL.

Now that Mickelson is featured in ENBREL TV ads, everyone knows he is a paid spokesperson. Also, his commercial speech and Enbrel endorsements are now regulated by the FDA, which means he can no longer make outlandish efficacy statements such as the one above.

Instead, the best Mickelson can now say is “I’m surprised how quickly my symptoms have been managed” (watch the commercial here). Also included is all the scary side effects of this drug, which Mickelson didn’t mention in his media interviews BEFORE becoming a paid spokesperson. 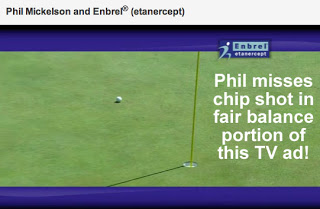 In the Enbrel TV ad, Mickelson is seen hitting golf balls. In the ad, he misses a chip shot, which seems to add insult to injury. This could have been a regulatory necessity, however. Perhaps if the ad showed him getting the ball in the hole from the rough, the FDA might have sent AMGEN/PFIZER a letter complaining that this could be interpreted as overstating the benefits of ENBREL.

Actually, Mickelson is shown making a putt in the beginning of the ad, when recalling how he felt like he was at the top of the world. The missed chip shot appropriately came during the fair balance portion of the ad. The part that everyone hates!

I don’t think the American public realizes the amount of thought that goes into these ads! If it wasn’t for the FDA, much less thought would be needed and we wouldn’t have people like me studying these ads and interpreting hidden meanings! (For the ultimate analysis hidden meanings in drug ads, see “Ruth Day and the Bees Repeat Performance at House DTC Hearing“.)

Phil Mickelson is also featured on a “non-branded” disease awareness campaign launched by Pfizer & Amgen in August, 2011, the companies that manufacture and market ENBREL.

The centerpiece of the campaign is the “On Course with Phil” website, which is pretty lame by today’s social media standards. Before I get to that, let me show you the homepage screen that I just captured: 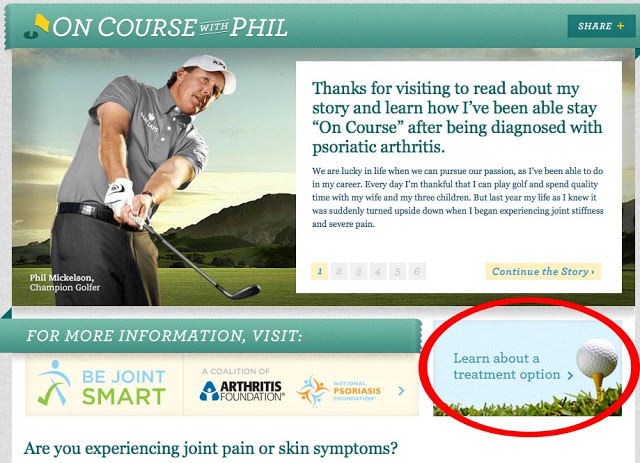 In case you missed it, I circled the “money shot,” which is not Mickelson hitting the ball in the hole, but the prominent link to a “treatment option.” The link, of course, leads directly to the branded ENBREL website. Surely, this biologic compound that has a LONG list of things you need to tell your doctor about before taking (eg, “if you live or have lived in …the Southwest”) is NOT the first treatment option one should consider!

Amgen and Pfizer have teamed up (ie, given money to) the Arthritis Foundation and the National Psoriasis Foundation — patient groups — to form the “Joint Smart Coalition,” which is responsible for the “On Course with Phil” campaign.

On the “On Course with Phil” website, Mickelson says that he first experienced pain right after the 2010 U.S. Open, which was held in Pebble Beach, California — the same “Southwest” that the ENBREL package insert says you should tell your doctor about if you ever lived there.

The website is pretty primitive. I was hoping to see at least a video clip of Phil shooting some balls or maybe even telling us personally about his experience. Instead, you have to click “1”, “2”, etc. to read what he has to say. Very BORING!

And that “SHARE” button in the upper right corner — it’s not what you think. All it is is a form whereby you can send an email to one other person. Where’s the social media share button that allows you to share this site on Twitter, Facebook, etc?

Pfizer is often touted to be a leader in social media. But if Pfizer built this site, then it’s not worthy of wearing that mantle. The real reason this site is basic Web 1.0 may be that AMGEN and PFIZER spent all their money on signing up Mickelson and they have none left over to do anything fancy like video or social media integration (see Amgen Blows Its Marketing Budget on Phil Mickelson Campaign). Or, it could be that “un-branded” Web sites traditionally play second fiddle to branded sites.

I’ve often said that celebrities and social media is a “match made in heaven” for product promotion and that the drug industry is likely to use this combination more often (see “Use of Celebrities for PR and DTC Advertising“; use discount code: 71-01PMYFREE). So, it’s a surprise to me that Pfizer and Amgen have not (yet) taken advantage of the synergies between celebrities and social media as other drug companies have done (see, for example, Danica Patrick: NASCAR Driver, Super Model, Superbowl Lingerie Ad Model, & COPD Spokesperson All Rolled Into one!). But, hey, it could still happen!

Mickelson was featured on the cover of the Mar-April 2011 issue of Arthritis Today magazine (see photo).

When Mickelson made the statement “I have no aches and pains. My back feels great. I feel stronger and more flexible than I’ve ever been,” he was obviously demonstrating to AMGEN/PFIZER — the companies that market ENBREL — what he can do to help them promote their product. As described above, AMGEN/PFIZER were suitably impressed and signed him up a few months later (or so they say).

Now that Mickelson is a paid ENBREL spokesperson, his remarks are more balanced. Here are some quotes from an article in the Arthritis Today issue that features him on the cover:

“Phil tried taking prednisone [a generic drug], but the side effects were awful, he says.” [His Mayo Clinic doctors prescribed “weekly injections of a biologic drug”; later in the article several brand name drugs, including Humira, Enbrel, Remicade, and Simponi, are mentioned, but the article doesn’t reveal exactly which drug Phil is taking — that’s already on the record elsewhere. But we now know that he didn’t like the generic medicine.]

“I like where I am physically and am optimistic about 2011.”

“I might take the medicine for a year and then go off it. Then, when and if it flares up, I’d go back on the medicine. I’m OK with taking medicine the rest of my life if I have to.”

At the end of the Arthritis Today article is this NOTE: “This interview took place after Phil Mickelson entered into a partnership with Amgen-Pfizer, an Arthritis Foundation sponsor, in November, 2010.”

So, Amgen-Pfizer not only has to pay Phil, they also have to pay the Arthritis Foundation to get his story published! No wonder AMGEN has blown its marketing budget (see here).

P.S. Here’s a little math/ROI problem thanks to a Twitter pal of mine. Assuming AMGEN/PFIZER spent $14 million to retain the endorsement of Phil Mickelson (not counting the cost of ad creative or media buys), how many ADDITIONAL doses of ENBREL will have to be sold to break even?