PharmaGuy (aka John Mack) presented the coveted bright yellow Hawaiian shirt/Pharmaguy Social Media Pioneer Award to Dennis Urbaniak, VP, Joan Mikardos, Senior Director, and Laura Kolodjeski, Senior Manager, Patient Solutions, at Sanofi US Diabetes. The award was made at the 6th Annual Digital Pharma East conference in Philadelphia on October 17, 2012. Accepting the award on behalf of the winners — who could not make it in person — was Wendy Blackburn, Executive Vice President, Intouch Solutions.

The Pharmaguy Social Media Pioneer Award is meant to recognize pioneers who work (or have recently worked) within regulated drug and device companies. The award recognizes courage in the face of regulatory and corporate culture road blocks!

The following people were listed as official “nominees” to receive the award in an online poll:

Respondents could select more than one person and/or nominate someone else not on the list. A summary of results is shown in the Figure below. Only results from respondents who were willing to provide identification (i.e., email addresses) — to eliminate voting “fraud” — are included in these results (N=60).

Urbaniak and Kolodjeski received the greatest number of votes. While the Pharmaguy Social Media Pioneer Award is NOT a popularity contest, the responses to this survey do have some influence regarding who wins. More important are the comments made. For example, comments described Urbaniak as “the most innovative guy in pharma” and one respondent said he “opened new ways of engaging with patients in the diabetes field, with courage and consistency.” Kolodjeski was praised because “she keeps the patient at the center of all her efforts. She is a great example of how we should go about our business in Pharma.” 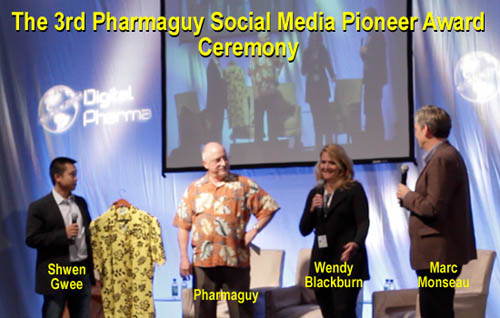 Several deadlines have passed by which FDA had promised to provide social media guidelines to the pharma industry. In our highly-regulated world where companies hang on FDA’s every word, it’s easy for companies to use the lack of guidelines as an excuse not to engage in social media.

Some companies have done just that. They’re waiting for guidance. Hoping for clarity. And hiding behind excuses. But despite the lack of guidelines, the U.S. Diabetes Unit of Sanofi has — refreshingly — blazed ahead. And I was thrilled that several leaders (and Intouch clients) within that group — Dennis Urbaniak, Joan Mikardos, and Laura Kolodjeski — were recently recognized with John “Pharmaguy” Mack’s Social Media Pioneer Award at the 6th annual Digital Pharma East conference in Philadelphia.

Added Challenges
Lack of guidance hasn’t stopped Sanofi from using social media. Nor did a “disgruntled” patient who, in 2010 wreaked havoc on Sanofi via social media. When this self-dubbed “Taxoterrorist” attacked Sanofi’s Facebook page, did Sanofi hide? Did Sanofi throw up their hands and give up on social media? No. They managed through the crisis, they handled it with grace, and they took it one step further: they went public. Dennis Urbaniak went on record to share his advice and their learnings from the episode. You can read “9 Things Pharma Should Learn About Social Media from Dennis Urbaniak” or listen to the original Pharma Marketing Talk podcast here.

Sanofi’s Secret Sauce
Two years later, they have come a long way, and they’re still sharing. A recent article in FastCompany lays out how Sanofi has engaged in social media “without running afoul” of the FDA. Sanofi’s 360-degree approach, which includes a designated community manager, a number of online touchpoints, and even face-to-face engagement, all build toward Sanofi’s goal of supporting the diabetes community with a 360-degree approach.

The Best Recognition of All
All of this recognition was hard-earned and well-deserved. But I bet if you asked Dennis, Joan, and Laura what the most meaningful recognition is to them, it’s something else. They might mention it’s the relationships they have built with the diabetes online community. They might reference the people they meet online and IRL (“In Real Life”) that are living with diabetes and say “thank you.” They might also reference this [link] quietly published study of WeGo Health activists where patients themselves said Sanofi is “doing it right” (quote)

The diabetes online community points to how Sanofi is engaging and says to other companies, “Look at what they’re doing. Don’t tell me you can’t engage in social media. Sanofi is! And they’re doing it the right way.” When the diabetes community themselves recognize the effort, that’s the biggest reward of all. 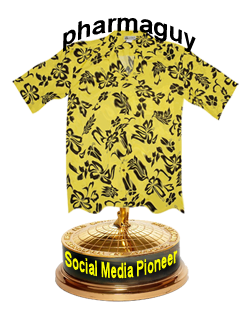 Although I didn’t wear my Hawaiian shirt at the FDA hearing, it became an emblem for standing out from the crowd, which is a necessary trait for a social media marketing pioneer. I think a Hawaiian shirt motif befits, therefore, what the Pharmaguy Pharma Social Media Pioneer Award stands for. Read more about the award here.