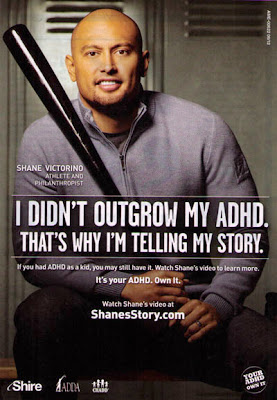 Adult ADHD (attention deficit/hyperactivity disorder) is the “next big thing” for pharma companies like Shire, which markets Vyvanse for the treatment of ADHD in adults. So says the author of a Salon article titled “Big Pharma’s newest invention: Adult ADHD.”

“Immature adult market continues to offer greatest commercial potential,” read a 2008 press release to the pharmaceutical industry from the market research agency Datamonitor: “Estimated to be twice the size of the pediatric ADHD population, the highly prevalent, yet largely untapped, adult ADHD population continues to represent an attractive niche to target.”

So who might consider themselves part of this “untapped” market?

Well, former Philadelphia Phillies center fielder Shane Victorino for one. The “Flyin’ Hawaiian” is now an adult ADHD celebrity spokesperson appearing in magazine ads like the one shown below and in video testimonials like the one you can find on ShanesStory.com.

If you talk to people in the know, Victorino is an ideal adult ADHD “poster boy.” I’ve heard that Victorino was a mile-a-minute talker and often people around him wished he’d shut up. In a Shire-sponsored YouTube video, Victorino himself admits “always interrupting” his teammates and having problems focusing.

Interestingly, Victorino doesn’t mention Vyvanse. It’s unclear, therefore, if he benefited from Shire’s drug, which entered the market in 2007, about 8 years into Victorino’s major league career and about the time that Victorino became a starting player for the Phillies.

So it’s unclear if Vyvanse — or any other medication — helped Victorino play ball as well as he did for the Phillies. Some have speculated, however, that his constant talking and interruption of teammates was one reason why the Phillies traded him. Could the trade be part of a devious Phillies plot to insert a disruption agent within the ranks of a rival team?

I’m just kidding, of course. Like many Phillies fans, I like Victorino and wish him the best.

Unlike some other pharma-paid celebrities, Victorino is not promoting a brand of drug, but promoting awareness of a medical condition. Some people — like the Salon article author — claim that ADHD awareness marketing is a form of “disease mongering,” which causes more people to be diagnosed with the condition than is necessary. But that’s a whole other issue that I don’t have time to get into now. You can read about disease mongering here.