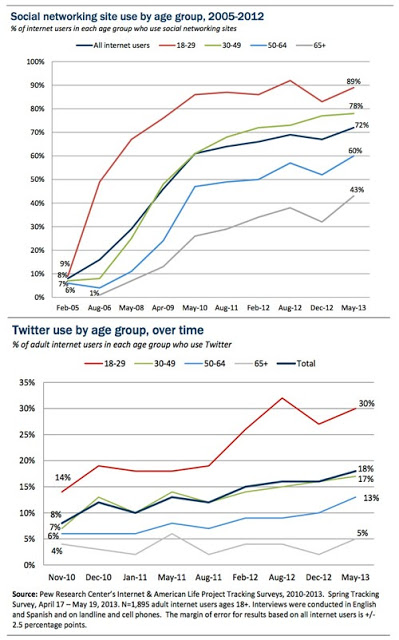 According to Pew Research Center’s Internet & American Life Project, 72% of online adults use social networking sites, but only 18% use Twitter. See the chart below, download the report here.

Young people (18-29) dominate Twitter, which may be one reason why pharmaceutical marketers are not so keen on Twitter. Why risk regulatory action when most of your key target audience (older adults) are not there? Better to stick with Facebook where a much higher percentage of older online adults are frequently seen.

PEW points out that there has been a sharp rise in use of social media by older online adults: “Those ages 65 and older have roughly tripled their presence on social networking sites in the last four years—from 13% in the spring of 2009 to 43% now.” If you look at the Twitter curve, the 65 and older line waivers and the 2013 number (5%) is only slightly higher than the 4% in 2010.

According to PEW, in April 2013, 54% of American adults ages 65 and older used the internet or email. When Pew first began tracking Internet use in 2000, only 13 percent of seniors were online. Perhaps most of that growth just means we are all getting older. Whatever. Seniors still don’t do Twitter. Facebook is much more popular with this group.

I expect, therefore, that pharma marketers will focus even more effort on Facebook in the future and leave Twitter to corporate communications.

With that in mind, perhaps FDA should focus more effort on publishing guidelines SPECIFICALLY for Facebook and not worry about Twitter issues such as how to achieve fair balance in 140 characters or less.

But if pharma wants to do branded Facebook pages, it must allow comments. With comments, however, comes the double-headed dragon feared by pharma: unsolicited requests for off-label information and handling potential adverse event reports.

FDA already has issued guidance for handling off-label requests but has not yet said much about how to handle adverse event (AE) reports received via social media. The whole AE issue may be a red herring that pharma uses to avoid social media altogether because of the resources needed to properly manage Facebook pages with comments turned on. So, I am not sure FDA guidelines would help overcome this “hurdle.”