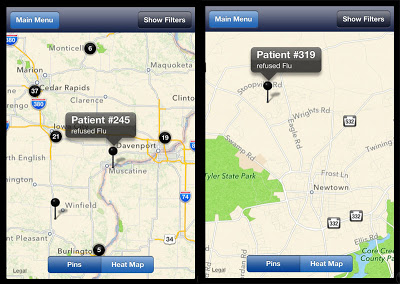 According to the developers, “vaccinations are one of the most important interventions for preventing the spread of several infectious diseases. Refusing recommended vaccinations puts communities at greater risk for outbreaks of vaccine preventable diseases. This app enables pediatricians and other health care providers to very quickly document and track instances of vaccine refusal.” 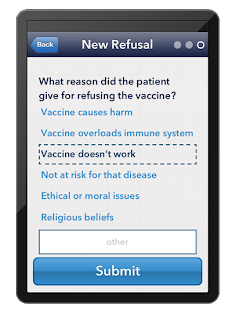 I downloaded the app and used it even though I am NOT a healthcare provider. In fact, I think the app would better be targeted to consumers than to physicians who are less likely to use it, although it is quite easy to use — you only need to enter a name, email address, and profession to register.

Regarding privacy issues, I notice that there is no privacy policy per se, just a statement that says “Your information is kept completely private and will be used for verification purposes.” I did not receive any email attempting to verify that I was indeed a healthcare professional.

To submit a refusal you enter the patient’s sex, zip code (of hospital or clinic), and age. Then you select the vaccine that was refused (or all of the vaccines listed) and the reason the patient gave for refusing the vaccine.

On behalf of my 23 year old son, I submitted a flu vaccine refusal. He believes that the flu vaccine doesn’t work, which may be a reasonable assumption  (see “Does the Flu Vaccine Work? What 62% ‘Effective’ Really Means“). He may also have thought that he is not at risk for the flu, but I could select only one reason.

What I found interesting about the app is the Map function, which shows the distribution of refusals as pins on a map such as the ones shown below (the one on the right shows my refusal; I am relieved that this app does not use geo-location to show more precisely my location!):

It looks like most of the refusals to date are close to the University of Iowa. And most refusals are flu vaccine refusals — you can use a filter to display only certain vaccine refusals (RV, DTaP, Tdap, Hib, PCV, IPV, MMR, HepA, HepB, VAR, HPV, MCV4, or Flu or All Vaccines). It looks like one patient (#318) in Orgeon refused ALL vaccines! I am not sure what the numbers in the black circles refer to — the app is poorly documented.

Anyway, I will be interested in viewing the data as more and more “healthcare professionals” (or whoever) use the app.

More importantly, however, is how crowdsourcing apps like this may be useful for tracking why patients refuse other medications such as statins. The pharma industry knows that “Poor medication adherence costs pharma $564 billion per year.” From surveys of patients and physicians, the industry also knows the major reasons for this, but it has struggled to come up with a solution.

If the vaccine refusal app were targeted to consumers it could go one step further by adding an educational component so that when a patient submits a refusal, the app displays a screen that addresses the reason for the refusal by offering a counter argument based on evidence, of course.

For example, if my son entered his own refusal, the app could have informed him of the data regarding flu complications among people of his sex and age in his local area. It also could have provided evidence of the effectiveness of the vaccine for men of his age. That may have influenced him to change his mind. But he most likely would not be persuaded any longer no matter the data — he did not get the flu!

What’s Up with the Veramyst “Brief Summary” Print Ad?