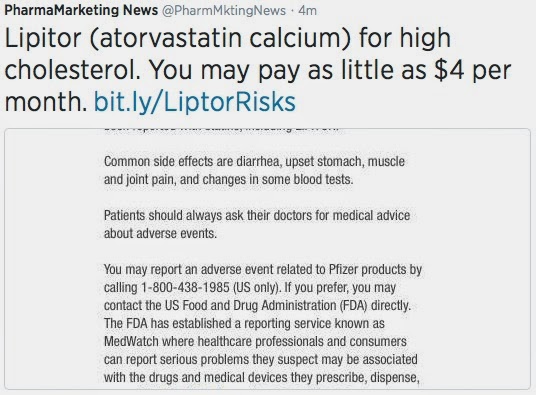 I couldn’t sleep last night. For some reason I became obsessed with trying to figure out a way that pharma companies can  create Rx branded tweets that satisfy  FDA’s recent “Industry Guidance for Internet/Social Media Platforms with Character Space Limitations — Presenting Risk and Benefit Information for Prescription Drugs and Medical Devices.”

In a comment to the FDA on Regulation.gov, I described a Tweet that may pass muster with the FDA.

“The draft guidance does not mention Tweets accompanied by images, which is perhaps a way to present ISI along with benefit information in the tweet itself,” I said. “I have created a mock-up using Lipitor as an example.”

In this mockup, the character portion of the tweet contains the required trade name and established scientific name plus refers to the indication (“high cholesterol”) and includes a link to a page devoted to the risks.

The shortened version of the URL makes it plain that the link is to a page devoted to risks — a requirement mentioned in the guidance. That page also links to the coupon information, which is OK to do according to the FDA guidance document.

In addition, the tweet includes the total ISI (important safety information) as a JPG image, which is clearly readable on the Twitter page as shown in the screen shot above.

A caveat: An image takes 26 characters away from the tweet, so there is even less space to use for promotion. But as my example shows, it’s possible.

My question: Do tweets such as this satisfy the requirements of the guidance document?