Last week I reported on PhRMA’s tardy response to my complaint about Sepracor’s violation of PhRMA’s DTC Guiding Principles (see “PhRMA’s Response – PRwise, it Stinks!“). I also posted questions to PhRMA about its response. Namely, I wanted to know:

Nina DeLorenzo, Senior Director, Communications & Public Affairs, first sent a statement/press release from Ken Johnson, senior VP, on the Office of Accountability, its purpose, and how it works. (BTW, is Emily Johnson related to Ken Johnson? See below.)

[I am honored that Mr. Johnson has issued a personal press release just for me (you won’t find it among the press releases on PhRMA’s Web site), even though it says nothing new and did not answer any of my questions.]

Ms. DeLorenzo did attempt to answer my questions. Here’s her comments:

“We attempt to forward comments within a few days of receipt. We are not
sure what happened with regard to the receipt of your letter, but as
soon as we did receive your comment, we followed our normal procedure
and forwarded it to Sepracor in a timely fashion.

“Companies that are signatories to the Guiding Principles have provided
the Office of Accountability with the names of the people within those
companies to whom comments should be sent. We do not, however, release
these names to the media.

“The Office of Accountability hasn’t yet issued any reports on the nature
or number of comments it has received. When it does, the reports will be
posted on the PhRMA website and provided to the FDA.

“Additionally, I have attached for your information our recent release on
the Independent Review Panel, along with a short biography for each
panelist.”

[None of this is new information.]

I’m not happy with the explanation for the delay in responding to my comment — it’s really no explanation at all. My original letter to PhRMA was sent by certified mail on May 4, 2006. You can track it by going to the USPS web site and entering the tracking number: 7005 1820 0005 2547 4499

You can see that this was delivered at 8:23 am on May 15, 2006 in WASHINGTON, DC 20004 (how does it take nearly 2 weeks to get from Philadelphia to Washingtonm, DC?). Emily Johnson’s response to me was dated June 29, 2006 — nearly 2 months later. I can only assume that PhRMA forwarded my response to Speracor at the same time. Not exactly done in a “timely fashion” within a few days of receipt as claimed. Hopefully, this is not “normal.”

Eventually, I hope to find out from Sepracor who received my comment, when they received it and what their response is. However, despite repeated voicemails left with Jonae R. Barnes, V.P., Investor Relations & Corporate Communications at Sepracor, I have not heard back from her on this matter.

Let’s get back to Emily M. Johnson, the person who signed PhRMA’s response to me. Emily may be a lowly, hassled intern as suggested by Laurie Bredenfoerder — a member of the PHARMA-MKTING Online Discussion Forum. Here’s another bit of evidence that suggests this may be the case:

Emily Johnson — Ken Johnson. Can they be related? Ken is the Senior VP of Communications at PhRMA. Could he be Emily’s dad?

I remember my college years when my father hired me during the summer. He kept me busy and out of sight. For example, I had to sweep the basement over at 331 Madison Avenue (I was a janitor).

Not that Emily’s job is PhRMA’s equivalent to sweeping the basement!

Whoever she is, I hope there’s a bright future for Emily in public relations at PhRMA. With apologies to Ms. Johnson, allow me to express this hope in visual terms:

The Adventures of PhRMA Intern! 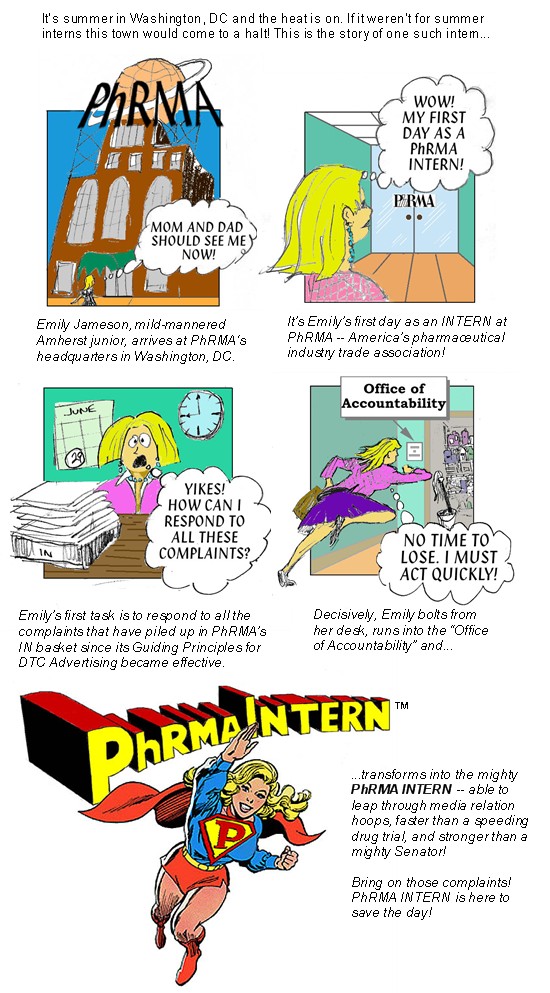 Stay tuned for the further adventures of PhRMA Intern!

“We do things at Pfizer that are best for shareholders of...