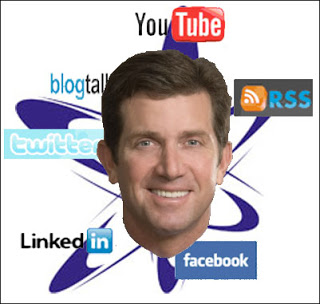 Alex Gorsky will have to address trouble at J&J’s consumer business when he becomes CEO, notes the Wall Street Journal (see here).

Sure, “those who know Mr. Gorsky laud his skills diagnosing problems by reviewing reams of data and visiting the company’s front lines, motivating experts on staff to fix the issues and then holding the staffers responsible,” but can he tweet? That’s what I want to know.

Gorsky should learn from the mistakes of his predecessor, Bill Weldon, who flubbed handling the growing PR crisis by not adequately, IMHO, leveraging social media to assure consumers he was working to resolve the issue. More importantly, however, Weldon did not use social media to interact directly with consumers.

Gorsky should have his own Twitter account, Blog, and YouTube Channel. And ALL of them should allow comments. Open the social media floodgates and learn why J&J is now ranked #7 instead of #1 or #2 in the Harris Poll Reputation Quotient study.

You might object and say that a CEO of a huge corporation such a J&J simply does not have the time to engage in social media. That may be the case. But I advise Gorsky to learn from celebrities and political candidates — have surrogates (ie, PR people) handle the day-to-day interactions and make sure you approve what they say in your name. But EVERY day make at least one personal tweet or reply to a tweet and every week write a blog post. Once a month, do a YouTube video update. Is that too much to ask of a CEO?

I cannot find a Twitter account for Gorsky, whereas at least 5 J&J junior executives have such accounts according to my “Pharma Social Media Pioneers” database (here).

Having a personal social media presence, however, is even more important when the NEXT crisis occurs — and, Mr. Gorsky, it will occur, believe me.

During a previous JNJ PR crisis, I was asked what I would do in JNJ’s shoes by Melissa Davies — a mom and Social Media Practice Lead at Return on Focus, a company that helps companies market their brands. Melissa asked:

“John, could you share some thoughts on what you would advise JNJ to do as part of a more fully developed social media response strategy? Are you thinking the company should have more Tweets, engage on more sites, etc.? I’m curious what you think the ideal roadmap looks like.”

“For what it’s worth, I believe this situation calls for more information and conversation no matter what the channel or the road.

But since we are talking about social media, let’s stick to that.

Because the CEO has been targeted, is expected to meet with Congress, and posted a message to JNJBTW, he should lead the discussion. In addition to a formal letter posted to the corporate blog, how about opening up a YouTube channel in which he and McNeil executives talk directly to their audience and provide updates. They should allow comments — and respond to as many as necessary.

Twitter can work with this to keep people informed about what is going on and link to specific videos.

If the CEO talks to Congress, get the transcript and post it before anyone else does. Ask readers to comment on how well or not so well questions were answered by the CEO and what was missing.

Of course, there needs to be some progress if you are going to give updates. Actions speak louder than words. Social media won’t solve the problems.

Right now, I feel that JNJ doesn’t have a handle on what’s causing the problems. At least that’s what I suspect from the reports I have heard. Maybe there are complicated manufacturing issues that involve things JNJ doesn’t want to be made public (eg, importation of tainted supplies from China)? Maybe this is a good opportunity to provide a virtual tour of a Good Manufacturing facility with interviews of employees.

I don’t know if this is a roadmap or not, but when your company’s reputation is at stake, the leaders have to be visible. You can’t just say “one of our companies has let you down” and leave it at that. What are you going to do about it so that it doesn’t happen again? is what people really want to hear from the people who are in charge, not the PR department.”

What do you think Mr. Gorsky? Is that good advice? Would you consider doing something along these lines yourself?

Boehringer Takes My Advice and Will Host the First-Ever Disease Condition...