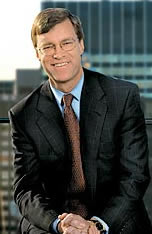 “The board had faced pressure to fire Messrs Dolan and Willard after a federal monitor overseeing the New York company urged their dismissal last night,” according to the WSJ..

“The board had little choice but to accept a monitor’s recommendation when directors met today to determine the fate of Messrs. Dolan and Willard. The company is operating under the terms of a deferred-prosecution agreement reached with the U.S. Attorney in New Jersey last year following a three-year investigation into a $2.5 billion scandal at the company involving ‘channel stuffing,’ or overloading wholesalers with inventory to meet quarterly sales targets. If the board refuses to fire Mr. Dolan, the company could face charges in connection with the probe.”

But the board had a couple of other good reasons to shove Dolan out:

If only BMS wasn’t under that deferred-prosecution agreement through which it avoided charges of conspiracy to commit securities fraud as long as it stayed out of trouble for two years. That’s a long time for a drug company to stay squeaky clean.

In this case, greed trumped caution. BMS got into “trouble” by attempting to extend its market exclusivity for Plavix and keep a lower-cost generic version out of the hands of consumers in the US.

As reported by the WSJ:

“Mr. Dolan’s handling of Plavix already had put him on shaky ground with the board. After learning that the company’s Plavix cash-cow was under threat from generic competition, he negotiated a deal that would have paid Canada’s Apotex Inc. tens of millions of dollars to delay its introduction of a copycat drug. That pact, aimed at settling Apotex’s legal challenge of the Plavix patent, unraveled in late July when the Department of Justice’s antitrust division opened an investigation into it and state attorneys general rejected it.

“In filings to the federal court in New York overseeing the patent litigation, Apotex has alleged that Bristol-Myers struck a verbal side agreement with it during the settlement negotiations that it then hid from regulators. A lawyer for Bristol-Myers has denied this to the court and has suggested that Apotex fabricated the allegation to torpedo the settlement.

“In the meantime, Apotex used binding concessions it obtained during the negotiations to launch a knockoff version on Aug. 8, after the deal was rejected by regulators. The generic version quickly conquered 75% of the market, costing Bristol-Myers as much as $600 million in lost sales. The court overseeing the patent case ordered Apotex to stop selling the generic version on Aug. 31, but didn’t force it to recall the product already in the distribution channel.

“Bristol-Myers pursued the deal with Apotex even though U.S. regulators have been hostile to such agreements on the grounds that they hurt consumers by keeping lower cost versions of life-saving drugs off the market. The Federal Trade Commission has criticized similar deals and has fought one of them all the way to the U.S. Supreme Court.”

Boy, did that whole Plavix debacle make BMS look ridiculous! Losing 60% of its stock value only added injury to insult!

Mr. Dolan’s removal marks the third ouster of a chief executive of a big U.S. drug company in the past 16 months. He joins Raymond Gilmartin (former CEO of Merck) and Henry McKinnell (former CEO of Pfizer) in the ranks of unemployed pharma CEOs.

What Do You Think?
Although the board may not have had a choice, of the two issues mentioned above, which do you think bothered the board the most and was the real reason for their ouster of Dolan (assuming the recommendation of the federal monitor was only a red herring)?

10 Things I Hated (and Loved) about the ePharma Summit