I came across the following in an MM&M NewsBrief yesterday:

“The number of DTC ads submitted is expected to climb again for 2006,” reports MM&M. You think?

I plotted these numbers in the chart below and added an estimate for 2006, noting that PhRMA’s Guiding Principles for DTC, which call for submission of all DTC ads to the FDA for approval before release, became effective January 1, 2006.

PhRMA’s principles are voluntary, but in 2005, Astrazeneca proposed a mandatory requirement for pharmaceutical companies to submit all direct-to-consumer advertising to the U.S. Food and Drug Administration for review prior to its use (see “FDA DTC Hearings Day 2“). AstraZeneca’s original proposal suggests several tradeoffs desired by the industry. For example, AZ proposed that any pre-approved ad should be exempt from a subsequent finding by the FDA that the advertisement is misleading or inaccurate. 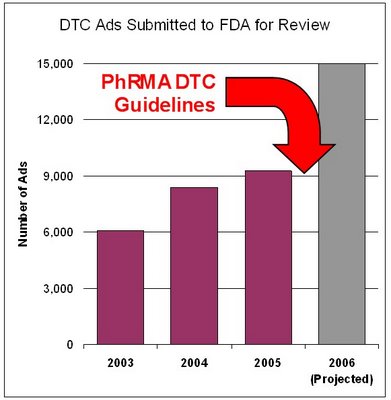 I estimated 15,000 DTC ads based on the fact that “the agency received 39,153 pieces of professional promotion for review in 2005,” according to MM&M. At least half as many DTC pieces as professional pieces must be produced by the drug industry.

[BTW, 39,153 different and unique professional promotional pieces is a remarkable achievement if you consider the 80/20 rule of promotion, which states that 80% of your effort should be focused on the top 20% of prescribers. The AMA doctor finder has 690,000 physicians in its database. 20% of that number is about 140,000, which means that practically every 3-4 doctors may get their own unique promotional piece designed especially for them! The drug industry in other words is achieving near one-to-one marketing as far as physicians are concerned!]

The MM&M NewsBrief ends with this:

The addition of the second DTC review team, first reported in The Pink Sheet, has fueled discussion between the agency and industry of a possible increase in PDUFA user fees. DDMAC also maintains four review groups dedicated to professional advertising.

While a recent Institute of Medicine (IOM) report was critical of the FDA and called for changes in DTC advertising (see “IOM Report Calls for DTC Moratorium“), it does not support increasing User Fees to cover FDA costs. In fact, the IOM suggests that User Fees be scaled back and that the agency get more direct funding form the government.

I don’t know how realistic this is. It sounds like too heavy a workload to me. There are sure to be mistakes made. IMHO, therefore, the FDA should not cave in to industry demands that a pre-approved ad be exempt from a subsequent finding by the FDA that the advertisement is misleading or inaccurate.