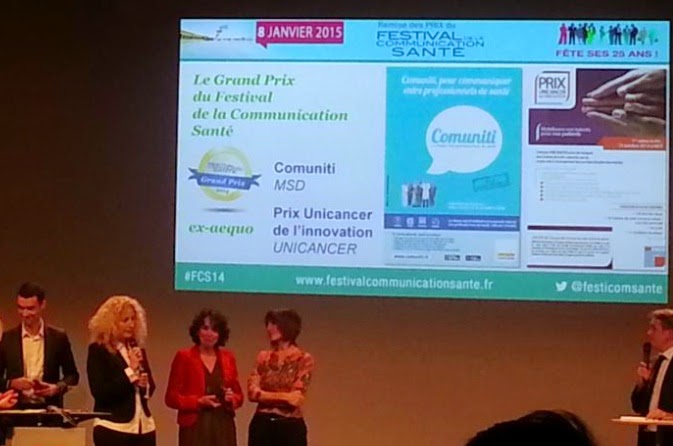 Congrats to Thibaud Guymard (@thibaudguymard), Digital Marketing Manager at MSD France, and his Comuniti team for winning the Prix Or de la Communication Médicale & Hospitalière in Paris at the yesterday.

Comuniti is a online community lunched in early 2014. It is part of MSD France’s Univadis service exclusively for healthcare professionals.

“Contact your colleagues and talk exclusively with health professionals,” says the Comuniti promo. “Work with your colleagues in public or private groups. Ask medical questions and find precise answers.”

These capabilities offered by Comuniti are a first for Univadis, which has been around for a long time (listen to this podcast: “What is Univadis?”).

Of course, it has to compete with other, similar services offered by independent companies and organizations. But MSD France hopes that Comuniti, coupled with the heaps of content available through Univadis, will be a magnet for French HCPs.

But are HCPs really interested in having discussions with their peers on so-called “peer-to-peer”  physician networks? I discussed this with Jeff Tangney, CEO & Founder, Doximity, and Shona Davies, Global Communications & Programme Leader for Univadis worldwide. You might be surprised at what they have to say about the value of online physician peer-to-peer discussions.

More than 50 percent of US physicians are members of Doximity’s professional network and Univadis claims to have more than 2.5 million healthcare professional members worldwide. So, Davies and Tangney know a bit about what doctors are doing in online communities.

Meanwhile, according to Tangney, only a few doctors on Doximity engage in online conversations and represent a “lonely docs club” rather than a collaborative network of professionals learning from one another. Listen to this 2-minute audio snippet from my interview of Mr. Tangney (listen to the complete podcast interview here):

Nevertheless, as noted by Tangney, physicians are commenting on articles much like you or I would submit comments to blogs and Wall Street Journal articles. Tangney refers to these discussions as “niche” communities. I would also say they are transient communities because these types of discussions tend to fade away as the news gets old.

Tangney also talked about moderation of comments and disses anonymous commentators who tend to become unruly.

Longstanding research says that anonymity tends to decrease trust and civility of conversation. However, when physicians who currently participate in gated communities were asked “Does anonymity make a difference in terms of willing to participate?”, the vast majority said they preferred anonymity because it makes the community more open, less guarded, and willing to take on controversial topics.

There was a “non-insignificant minority,” however, who expressed some problems with anonymity such as “I don’t know that I can trust anonymous responses; there’s a loss of a certain amount of accountability.”

In a Manhattan Research survey, thirty-seven percent (37%) of physicians would prefer to see the professional identity of commenters (open-identity models) vs 29% who preferred anonymity. For more on that, read this Pharma Marketing News article: “Physician Participation in Peer-to-Peer Social Media Sites“.

Do You Trust This Man? Pfizer CEO Says Lack of Trust...