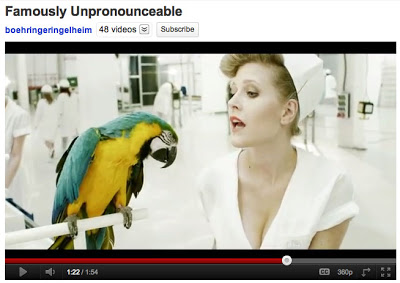 “In this brave new world there are better marketing tools than Facebook o Twitter,” says Ray Cokes (@raycokes), the actor who plays the “new head of marketing” at Boehringer Ingelheim (BI) in a new YouTube video that spoofs efforts to pronounce the company’s name through “word of mouth” (WOM) marketing. The agents for this campaign are parrots who are being conditioned from egg to adulthood to correctly pronounce “Boehringer Ingelheim.” The parrots are then shipped out to do their WOM thing.

[I accessed the original video is here when I first made this post. A day or day later, however, BI made the video private and unviewable by the general public. In a tweet, BI said “The vid was made for a test & the period of time was short, so that is why the vid must be made private for now.” BUT, thanks to crazyParrot, the video has been uploaded here.]

The parrot in the following frame captured from the video is having a problem and says Sauerkraut! instead of Boehringer Ingelheim. Obviously, the bird is distracted by one of the buxom “lovely ladies” that comprise the BI training staff. By the way the bird is staring into the woman’s cleavage, it could have said Spaltung! Whatever … Ray is not happy!

Another lovely lady — Faith Busch (@faithandcomm), who tweets for the @Boehringer Twitter account — told me last week during a conference in Lisbon to expect something exciting on YouTube from BI. I guess this is it.

The new video, IMHO, is not as funny — and maybe not as “famous” — as the one I found over a year ago (see “How DO You Pronounce ‘Boehringer Ingelheim’?” and below).

It turns out that the above video was produced on spec by an agency trying to win BI business by showing off their creativity. I guess it wasn’t “new world” enough — in fact, it has a certain “iron curtain” feel to it compared to the sterile, all-white “new world” feel of WOM!

I’m becoming more and more interested in BI because it is “pushing the envelope outside the boundaries” in social media. See, for example, “Boehringer vs Facebook Social Media Socialism.” BI also seems to have a sense of humor.

It’s also a “personable” company — Faith told me that she often runs into Mr. Boehringer (Jr?) in the BI cafeteria and says hello. I can’t imagine the CEO of a publicly traded US pharma company eating in the cafeteria with the minions!

I too would like to meet Mr. Boehringer in Ingelheim and say hello. Maybe he’ll invite me in to make a presentation to the lovely BI marketing people about what I’ve learned from observing pharma’s social media efforts during the past 5 years.

A Physician Looks on the “Bright Side” of Metastatic Breast Cancer...