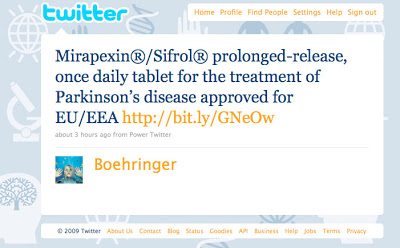 The link in that Tweet leads to this press release, which provides the details, including fair balance (eg, side effects).

Please be advised
This release is from Boehringer Ingelheim Corporate Headquarters in Germany. Please be aware that there may be national differences between countries regarding specific medical information, including licensed uses. Please take account of this when referring to the information provided in this document. This press release is not intended for distribution within the U.S.A.

About two-thirds of my Twitter followers are based in the US. According to this source, 62% of ALL Twitter users are US based. Therefore, it is difficult for me to imagine that BI did NOT intend this Tweet to be distributed within the U.S.A.

So there’s THAT criticism of this Tweet. I also criticize it for violating FDA regulations (and maybe ABPI guidelines as well).

BI’s branded tweet goes one better — or worse, depending on your viewpoint — than Novo Nordisk’s Levemir branded Tweet (see Novo Nordisk’s Branded (Levemir) Tweet is Sleazy Twitter Spam!). Namely, it mentions BOTH the product name AND the indication without including within it the fair balance. It is, therefore, very similar to the paid search ads that the FDA said violated the law (see “FDA’s Actions Speak Louder than Its Words: On the Internet It’s the Medium as Well as the Message!“).

Up until now, BI has been very careful to avoid this sort of thing in its Tweets. I wonder if this was some kind of oversight, because it doesn’t make much sense to issue such a branded Tweet in the USA or anywhere else.