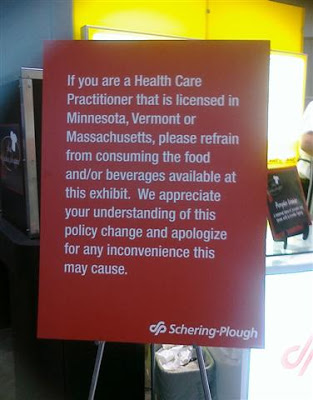 The pharmaceutical industry doesn’t like “sunshine” laws passed in some states that either forbid or put limits on gifts to physicians. In a bid to prevent these laws from passing, the industry made threats to pick up their dollar bills and play in other states; eg, not run clinical trials in Massachusetts or not have booths at medical meetings in Vermont. As if!

Some might call it blackmail, others call it good business practice. Whatever. The ploy didn’t work and Massachusetts, Vermont, and Minnesota passed their laws anyway. And drug companies still run clinical trials and have booths at medical meetings in those states, which are renowned for their medical clinics and/or meeting venues (MA: All sorts of great medical centers; MN: Mayo Clinic; Vermont: skiing; say no more, a nod’s as good as a wink to a blind bat!).

If you can’t live without those states, you’ll just have to live with them. But you don’t have to take it lying down is how Schering-Plough views it. That company has denied MA, VT, and MN doctors a scoop of ice cream on a cool autumn afternoon in Boston! Dude, that’s rad! Here’s a sign seen at the ACEP Scientific Assembly in Boston (Hat tip to Whitecoat):

According to Whitecoat, “The legal picture of the day was at an ice cream stand. Sorry you docs in Minnesota, Vermont, or Massachusetts. Either your butts are too fat or there is some legal decision stating that ice cream cones may unduly influence your decision to prescribe medications.”

I’m not going to get into how big some docs’ butts might be or how silly VT’s sunshine law may be, but it is inconceivable that free ice cream at a medical convention in Boston would rile VT prosecutors enough to send undercover VT docs to the meeting in order to catch SCP in the act of giving away free ice cream!

What is silly, however, is SCP putting up this sign in an obvious (to me) attempt to rile VT, MA, and MN physicians, hoping they will go back home and complain to their lawmakers how they were denied a scoop of ice cream!

I’m sure all the MA, MN, and VT docs had a good laugh as they strode in to the exhibit for their just desserts!

Bill Would De-Stigmatize Vermont Docs and Allow Them to Partake of Pharma-Sponsored Free Ice Cream, Etc., at Medical Events

Doling Out Dough to Docs: Types of Payments Pharma* Made to...