I recently attended and survived another pharmaceutical eMarketing conference (CBI’s eMarketing for the Pharmaceutical Industry). As usual, I came away feeling like a time traveler returning from a visit to the past. Pharma marketers are the first to admit that they are not trend setters and usually trail other industries by 2 or more years when it comes to the Internet.

Vendors were subtly and not-so-subtly trying to convince the pharma people in the audience that it’s high time to do more marketing via the Internet. This process starts with quoting some numbers to show that other industries are way ahead. Conference chairperson, RJ Lewis of eHealthcare, made a “That was then, this is now” argument and showed a convincing chart of Ad spending over the years. After a trough caused by the Internet bubble burst in 2000-2001, spending rose substantially — 30% in the last year — and is currently at $12.5 Billion (see chart). 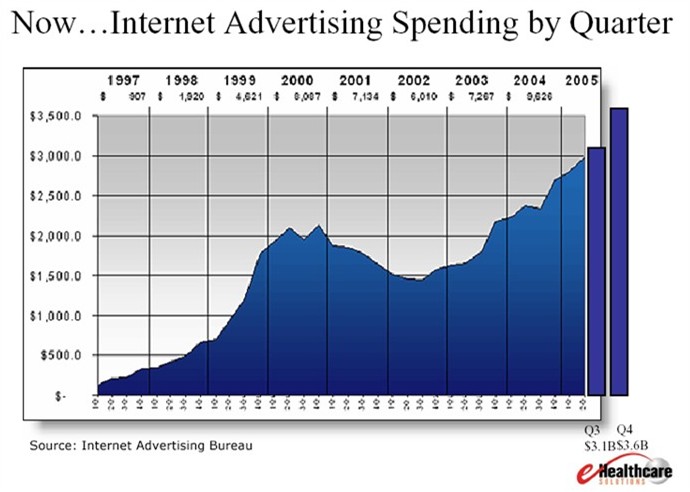 Of course, RJ did not get into what portion of this ad spend was attributable to pharma nor did he specify if it trended as in the chart above (ie, he didn’t say that pharma Internet ad spending was 30% higher “now” vs. “then” — I doubt that is is). It’s generally agreed, however, that pharma spends less than 5% of its ad budget online — less than $600 million per year.

There are many examples of marketers using consumer generated content. From a recent Wall Street Journal article:

“Drawing consumers into marketing campaigns is a time-honored tactic, whether companies are searching for the new Oscar Mayer kid, Brawny man, or Crayola Crayon colors. But in recent years, the Internet has furthered the conversation between corporations and consumers, tapping into the public’s views and talents on a grander scale. Meanwhile, new technologies enable even amateurs to create sophisticated images. Earlier this year, Subaru of America enlisted fledgling filmmakers to produce 30-second films. The company was trying to generate awareness for the launch of its Subaru B9 Tribeca, an SUV.” [“Marketers’ New Idea: Get the Consumer To Design the Ads,” WSJ, 12/14/2006]

Buzz ‘n Blogs
I’d like to focus on “buzz ‘n blogs” (remember, you saw this term here first!) As RJ put it: “Then: Good content attracts users” and “Now: Empowered users create good content.” He cited blogs and Wikipedia (which is a sort of consumer-generated encyclopedia that some people contend comes close to Britannica in terms of accuracy; could a Wikipedia version of the Merck Index be next?).

Clearly, a lot of people online are tapped into blogs as the following chart shows: 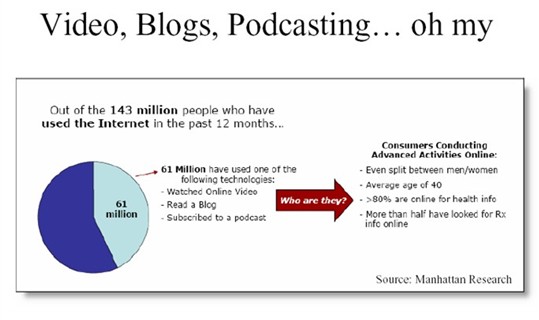 With so many fish in the pond, it’s no wonder that some pharma marketers are wondering if and how they should use buzz ‘n blogs to their advantage. At the CBI meeting, this topic was discussed by a panel of experts, which strangely included a Google representative.

Anyway, as usual, I digress.

Paul Ivans, the panel moderator, pointed out that between 20,000 and 70,000 new blogs — the most talked about type of “user” generated content on the Internet — are created every day and that the number of posts to blogs and message boards (another form of user generated content) is increasing dramatically (see Chart). 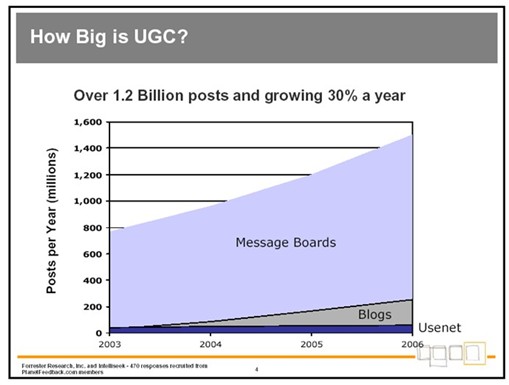 Buzz ‘n Blogs are attractive targets for advertisers not only because of the volume of participants (ie, reach; 41 Million US adults use blogs, message boards, or podcasts) but also because they think they can enlist — I would say dupe or pay off — consumers to spread their messages to other consumers. After all, poll after poll shows that consumers trust other consumers. A Neilson Buzzmetrics poll claims that consumers trust consumer opinions posted online more than they trust advertising in newspapers, magazines, TV, or radio. Duh!

What marketers want to do is manipulate that trust to their own ends. There are various means for doing that.

Advertising on Blogs
First, there is the technique of “latching onto a star” where the advertiser pays a blogger to run ads on the blog. The blogger could be a patient, a physician, or an industry pundit like me. Ivans showed a finding from some study (may have been from Manhattan Research) that consumers are twice as engaged on Yahoo! expert blogs (eg, physician blogs) than other Yahoo! content on the same topics. Therefore, it makes sense, from an online marketer’s point of view to advertise on those expert blogs.

Should bloggers accept advertising from companies that they may criticize in their blogs? Will that influence their opinions and change the “voice” of the blogger? It’s what I call the advertising principle of uncertainty. Bloggers are popular because of their independence form “the man” – a perceived lack of independence caused by advertising makes the blogger less independent and hence less popular. Pretty soon, advertisers will not be interested in running ads on that site.

Now, I accepts ad to be run on this blog. However, they are ads served up by Google based on the content. I can only say to Google that I do not want ads that link to certain URLs. In other words I do not choose the ads. Secondly, not a lot of money is involved. Therefore, my editorial side feels totally separate from my commercial side. I don’t think twice about criticizing a pharma company or a brand drug.

Things might be different if big bucks were involved. But that’s why I have a more “balanced” newsletter and an opt-in list of subscribers who want to receive commercial messages. The blog is my church, the other stuff is my state. I hope to keep them tied together, but separate!

Stealth Marketing
Marketers are being enticed to delve into the blogosophere in more nefarious ways than via advertising. It is expressed thusly: “Consumers of UGC are ‘hyper-engaged’ and therefore advertisers should embrace UGC to engage their targets in new, open dialogue.” That is, jump into the conversation and “influence the influencers!”

Heaven forbid that there are conversations about your brand going on out there that you cannot control! It’s questionable how “open” a dialogue is when one participant views the other as a “target”! I know this is jargon only meant for other marketing professionals, but it nevertheless suggests that marketers can never be open and honest. It’s just not in their nature nor is it even their goal (see “Is Pharmaceutical Marketing BS?” for more on this).

All this talk about “dialogue,” therefore, is a lot of bullshit. What will happen is that marketers will try and create their own blogs and disguise them as consumer blogs or they will pay off expert (eg, MD) bloggers to write approved content disguised as the expert’s opinion. That’s not engaging in dialogue, that’s stealth marketing. I suspect this sort of thing is already going on (see “Cialis Blog Shut Down“).

What clearly is needed is a code of ethics defining what is and what is not acceptable buzz ‘n blog marketing. I hope to write more on that in future blogs. Meanwhile, your comments are welcome.