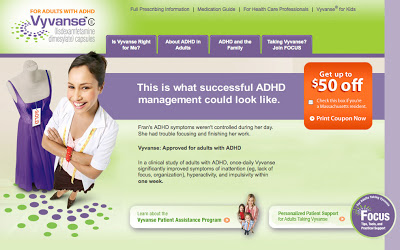 If an image is worth a thousand words, then this image found on the Vyvanse Web site home page is shouting off-label promotion.

Is it a coincidence that this image, showing a woman (“Fran”) with a measuring tape and a dress, evokes weight loss, which is one of the common side effects of Vyvanse and similar stimulant dextroamphetamines?  (Vyvanse is a “prodrug”; it gets converted to stimulant dextroamphetamine in the body). Thanks to “Chad” who pointed this out to me via the “Contact Us” link above.

Other drugs have been promoted off-label for weight loss. Just yesterday I reported that Johnson & Johnson was fined $81.5 million for misbranding and illegally marketing Topamax for weight loss, among other things (see “Trouble in the House that McNeil Built: Why Drug Company Silos are Useful“).

Compared to the Topamax off-label case, the Vyvanse off-label imagery is pretty subtle and perhaps only people like me (and “Chad”) would even think it was more than a coincidence. Images in direct-to-consumer (DTC) ads, however, are carefully chosen by pharma marketers and the FDA does pay close attention to them as part of the overall message. An example is the shrinking planet Avodart ad that received an FDA letter because the image showed too much shrinkage (see “FDA Warns GSK About Enlarged Avodart Ad Imagery“). Other critics have even pointed out things like the speed of flapping bee’s wings in some DTC ads (see “Ruth Day and the Bees Repeat Performance at House DTC Hearing“).

These days, the FDA is paying more attention to subtleties in Rx drug promotions. For example, FDA recently sent Novartis warning letters about two unbranded Web sites that it said illegally promoted Gleevec even though the brand name was not mentioned on the sites (see “FDA Warns Novartis Over Gleevec Internet Sites“).

Maybe the FDA reads this blog and will take a look at the Vyvanse Web site. If it decides to send Shire a letter, it may not happen for several months, by which time “Fran” may have been replaced by “Frank,” a trucker having a late night meal at a truck stop. Pretty stimulating image, eh?