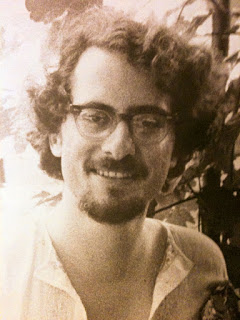 Medical Marketing & Media (MM&M), one of the more interesting industry magazines, just printed a piece by my friend and colleague, Harry Sweeney, called “Clash of Civilizations”(see figure below). 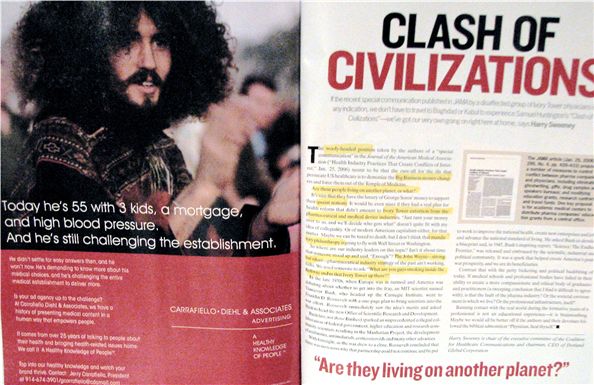 The juxtaposition of the editorial copy and the ad must surely have been deliberate — the colors even match. Talk about separation of church and state! A reader might even be misled to believe that the ad is really an illustration accompanying the article, which begins with the phrase “wooly-headed.” The “Hippie” image in the ad is certainly an icon of “wooly-headedness” if ever I saw one.

In the article, Harry describes the position taken by the authors of a recent Journal of the American Medical Association (JAMA) article, which urged physicians to reject gifts and payments from the pharmaceutical industry (for more on this, see “Gifts That Keep on Giving” and “Free Gifts to Physicians: What’s the Big Deal?“).

A quick search of Google suggests that “wooly-headed,” “liberal,” and “ivory tower” are often used in conjunction with one another, as in “wooly-headed liberal thinking.” Harry, for example, goes on to accuse the authors of the JAMA article of “Ivory Tower extortion” because they dared to suggest that CME grants from pharma companies be managed by accredited institutions rather than by individual physicians. He also hints that these “wooly-headed,” “Ivory Tower” ideas are unAmerican (he says the authors’ statements don’t fit with his idea of collegiality or with “modern American capitalism”).

What better image of “wooly-headedness” could you pick than the Hippie in the ad? [How about Frederick Douglass? Just before the civil War, when Frederick Douglass was managing the underground railroad helping slaves flee the South, he was often described as a “wooly headed son of Africa.”]

I also like the title of Harry’s piece — “Clash of Civilizations” — in conjunction with the Hippie image. It reminds me of the clashes between New York construction workers and anti-Vietnam War, hippie demonstrators. Harry, you surely do not want to elevate the conflict between academia and the pharma industry to that level do you?

Harry also wonders if the academics are “living on another planet.”

If you read the ad copy and you make the connection between Harry and the Coalition for Healthcare coalition (CHC) and if you have read about the CHC’s petition to the FDA (see “DTC without the Risk“), you might just conclude that Harry is on another planet.

The ad talks about marketing communications focused on the over fifty baby boomer and former hippie: “He didn’t settle for easy answers then, and he won’t now. He’s demanding to know more about his medical choices…”

The CHC, of which Harry is the executive committee chair, recently suggested that the FDA approve direct-to-consumer ads without specific risk information (an easy answer to the problem of communicating risk to demanding consumers). The CHC also said that “the patient is the decision-maker only with respect to whether a practitioner should be approached.”

BTW, here’s what I looked like back in the day when I was just 25: