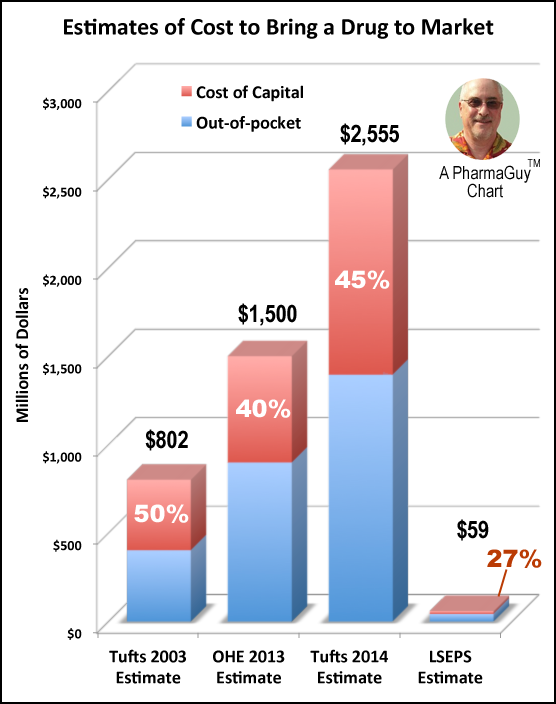 According to a new study by the Tufts Center for the Study of Drug Development (CSDD), which receives funding from the pharmaceutical industry, the estimated cost to develop a new Rx drug for marketing in the U.S. is $2,558 million or $2.6 billion (see press release). That’s 3.25 times the $800 previously estimated and frequently cited by the pharmaceutical industry, pharma trade publications, and the general media.

I have tackled the estimated $800 million drug develop cost gorilla before and garnered a lot of comments from readers, including Dr. Joseph DiMasi, whose team at Tufts came up with that number way back in 2003 (for more on that, read “Tufts Hangs Tough on Opportunity Cost Analysis“).

It’s about time CSDD threw out the old number and came up with a new, much larger number! But Tufts is not the only academics who have tackled the problem. As I reported in 2011, the London School of Economics and Political Science (LSEPS) cam sup with quite a different – much lower! – estimate of $59 million (see “A New Estimate of Drug Development Cost“) and the Office of Health Economics (OHE) at the University College London estimated the cost to be $1.5 billion in 2013 (see here).

These various historic estimates are summarized in the following chart:

No doubt the new Tufts estimate will reign supreme in coming PR campaigns launched by the pharmaceutical industry and repeated ad naseum in the press.

You’ll never guess who said the oft-cited 2003 Tufts estimate was  “one of the great myths of the industry“.

As reported by Pharmalot back in 2011,  “Speaking at a healthcare conference in London … Andrew Witty explained that the $1 billion cost to develop a drug, which is often cited as the reason why some medicines have high price tags, is actually ‘one of the great myths of the industry.’”

I doubt Witty would do a repeat of his opinion today regarding the new Tufts estimate.

But there are others out there who already are casting aspersions upon the Tufts estimate.

“Today nearly half of R&D spending is paid for by the taxpayer or by philanthropy, and that figure continues to rise as governments do more and more to make up for the pharmaceutical industry’s R&D shortcomings,” said Malpani. “Not only do taxpayers pay for a very large percentage of industry R&D, they are in fact paying twice because they then get hit with high prices for the drugs themselves.

“Regardless of how much R&D costs, the system is failing people in developing countries, as the latest example of Ebola shows, with over 5,000 deaths so far because there is no treatment or vaccine on the market; meanwhile millions of people continue to die from diseases such as tuberculosis. The R&D system as we know it is broken and must be fixed.”

Jamie Love of Knowledge Ecology International, said “The study is long on propaganda and short of details. The drug companies that fund the CSDD are hoping people will just take the number and quote it for several years until a new one is needed” (see here).

“There is actually a lot of evidence about drug development costs from the orphan drug tax credit,” notes Love. “Since 2005, 57 percent of new cancer drugs have been registered first for orphan indications, and 78 percent have benefited from the Orphan designation. Yet in the press conference, DiMasi acted as if these drugs were not important. Through 2010, the amount of money claimed for the Orphan Drug tax credit, which covers 50 percent of the costs of clinical testing, was less than $650 million — for all drugs being tested in that year! Hard to get from $650 million for 14 approvals to $2.6 billion for one approval.”

What a Difference a Day Makes!