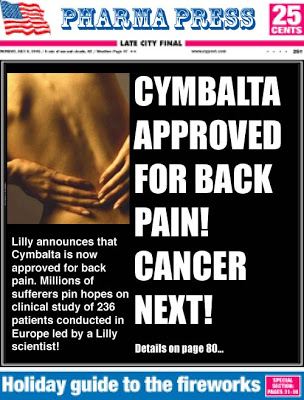 You got to hand it to the Lilly PR people and their minions for creating tremendous buzz about Cymbalta and back pain. Here are a few sample headlines:

The buzz even confused veteran reporter/blogger Jim Edwards into thinking that Cymbalta had just been approved by the FDA for back pain! Jim’s article on BNET (“What Lilly Learned From Steak n Shake: A Q&A on Cymbalta“) originally started with this statement:

“Eli Lilly’s Cymbalta is fast adding indications. Today the company announced it was approved for back pain and last week it was approved in Europe for generalized anxiety disorder.” [My emphasis.]

Jim has since changed this to read: “Eli Lilly’s Cymbalta is fast adding indications. Today the company announced the results of a trial to see if the drug can be used for back pain and last week it was approved in Europe for generalized anxiety disorder.” The Google Blog search results, however, still contain the original wording:

I pointed out this error to Jim in a comment to his BNET post, but he neglected to publish it and acknowledge his error. [PLEASE READ JIM’S RESPONSE IN HIS COMMENT TO THIS POST.]

My point is that even veteran reporters can be fooled by the spin put on these kinds of studies.

Keep in mind that the back pain study involved ONLY 236 patients, which is hardly a basis for making any kind of statistically-significant conclusions — something else I pointed out in my unpublished comment to Jim’s original article.

Not only that, the study was performed by a Lilly scientist and the data released at an obscure medical conference in Spain.

Sounds similar to a “seeding study” to me! That is, a study of dubious scientific merit whose purpose is to entice physicians to prescribe Cymbalta off-label (ie, to treat an indication not approved by the FDA or any other regulatory authority).

I pointed out previously that some Cymbalta direct-to-consumer (DTC) TV ads seemed to be promoting Cymbalta for pain beyond the limited “diabetic nerve pain” that it is officially approved for (see “eGAD! How I Learned to Stop Worrying and Love Cymbalta!“).

As reported on the Furious Seasons blog: “…last year one academic paper found Lilly’s claims of pain reduction in depression via Cymbalta treatment to be overstated and quite small in reality–an 11.5 percent effect size across several trials” (see “Lilly-Led Research Says Weak-Performing Cymbalta Good For Back Pain“).

“But the FDA has already approved the drug for use in treating diabetic neuropathic pain and fibromyalgia. The latter approval came only in June [2007]. It’s clear that Lilly very much wants to have the drug approved for at least one more pain indication so it can market the hell out of the drug–which is already being used off-label by pain management docs who are too scared of the DEA to treat pain with opiates and the Cymbalta results are not too grand from what patients tell me–but with a 12 percent effect size you’ve really got to wonder if the FDA would approve the drug because that is barely beating placebo in the real world. And, then, there are the drug’s well known side effects–suicidality, nausea, fatigue, and withdrawal problems. One hopes that the FDA takes that sort of thing into consideration.

“And if this new study is part of Lilly’s application for chronic pain (and I bet it is), then I’d really like to see Lilly put Cymbalta up against medical marijuana, which is approved for chronic pain treatment (and reportedly works pretty well) in several states. Bet the feds never let that trial happen.”

It seems that us bloggers are less prone to the hype than are veteran reporters! Yet the drug industry vilifies the press as being anti-pharma! Go figure. I mean, how much more could the press be under the influence of drug industry spin? Perhaps the industry covets no less than complete ownership of the press.