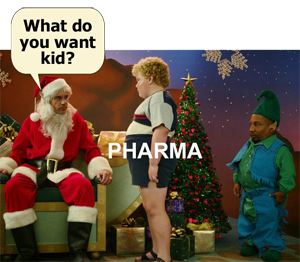 In the “Pharma’s 2011 Christmas Wish List for Santa” survey, I had a list of items for Santa to deliver to the pharmaceutical industry. Naughty or nice, the drug industry did receive quite a few of their most wished-for presents, including:

Make sure Congress passes the PDUFA reauthorization act WITHOUT those “additional provisions that could create unintended burdens on the regulatory process.” I’m pretty sure Santa delivered that present. As an extra-added bonus, Santa somehow convinced lawmakers to add this to the legislation:

“The Office of Prescription Drug Promotion (OPDP) has placed developing social media guidance at the top of its work plan for 2013, director Thomas Abrams says. Abrams outlined the offices priorities at the Pharmaceutical Regulatory and Compliance Congress in Washington, D.C. The social media guidance is of critical importance because the Food and Drug Administration Safety and Innovation Act (FDASIA) mandates the agency produce the guidance by July 9, 2014.” However, see the list of presents Santa did not deliver below.

I’d like a copy of Steve Jobs’s biography so I can learn why every sales rep needs to have an iPad! It’s official! Practically every pharma sales rep now has an iPad. The question is, is the device improving the sales call? For the answer to that, see: “How is the iPad an Effective Delivery Platform for Medical Sales Professionals?” (Subscription — free — required.)

Please stop all this talk about “GoSoMo,” which mashes together global, social, and mobile. At most, I can manage only two of these at one time! On the basis of my own anecdotal evidence, I think Santa delivered this present. I haven’t seen or heard “GoSoMo”at any of the conferences I’ve attended this year!

Please make sure the Supreme Court decides that drug companies do NOT have to pay their sales representatives for working overtime hours. Yep, got it! Thank you, Santa!

Talk to CMS and get them to issue reporting standards for payments to physicians. They need to do this before January 1, 2012, when the Physician Payment Sunshine Act takes effect. OK, this didn’t happen. However, CMS extended the data collection deadline to January 1, 2013, and has just recently provided a final rule (standards) to the White House Office of Management and Budget for review. This is usually the final step before its release. Better late than never!

That’s it for the presents that Santa more or less delivered as requested by the drug industry. The following are items on the wish list that Santa did NOT deliver:

Repeal “Obamacare!” The industry doesn’t have the money to subsidize the Medicare Part D doughnut hole AND to fund research into new drugs. The Supreme Court was only able to declare a small part of the law unconstitutional. And since the Republican presidential candidate who vowed to get “rid of it” — and Big Bird too — lost the election, I think the industry will have to wait for Christmas Future to try again for this gift.

Bring a “free” commercial speech case to the Supreme Court so that we may talk to doctors and patients about off-label uses of our products. That didn’t happen, but FDA did issue guidance on how to respond to unsolicited requests for off-label information (see here).

Make the FDA get off its ass and issue those social media guidelines — better yet, let’s get new regulations to make the guidelines legally binding. Didn’t happen, but see my “open letter” to FDA’s Megan Clark Velez, MPH, Office of the Commissioner (here).

Put an end to FDA’s “Bad Ad” program. It’s the “Phoniest Thing Ever.” Also didn’t happen. In fact, the program is great big success and I’ve heard rumors that the FDA is considering allowing ordinary citizens to report bad ads. I think this was in response to my letters (see here).

Please find Pfizer’s “Social Media Playbook” so we can all learn from it. I haven’t seen it. Have you? Some think this is it.

Naughty or nice, pharma always wants more. What do you think should be on pharma’s list this year for Santa?

Recipes 2 Go: Pfizer’s LIPITOR-Branded iPhone App. Is It an Ad...