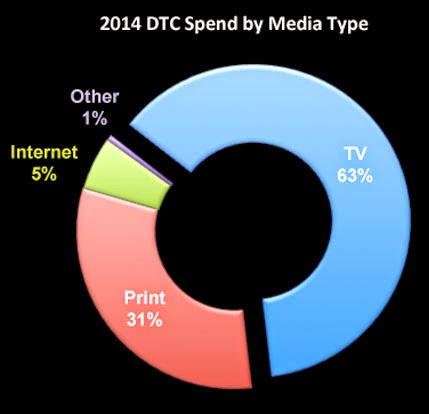 This chart says 5% of pharma’s 2014 DTC ad budget went to the Internet (excluding search), whereas the previous version says only 3%.

This chart says 63% of the budget went to TV, whereas the previous version says 70%.

Determining the exact amount that the pharmaceutical industry spends on advertising via different media (TV, print, Internet, etc.) is a daunting task. Numbers regarding pharma DTC spending come from two sources: Nielsen and Kantar Media. Both report “measured media” spending, which includes TV, magazines, news-papers, radio, outdoor, and Internet (display ads only, not including search). Kantar tracks over 3,000 media sources throughout the US and Canada, which is a different methodology than that used by Nielsen. As a result, the numbers from these sources often do not match (for more on that, read “Making Sense of Pharma DTC Spending Trends“).

Source of DTC Spend Data
I used three data sources to prepare the charts in the article cited above:

Note: Nielsen data did not include Internet spending as in past years. In 2013, Nielsen estimated that the pharma industry spent about $60 million on Internet ads (read “Is Online Pharma DTC Ad Spend Continuing Its Downward Slide?“). That’s significantly less than the $246 million estimated by Kantar for 2014 (source #3).

What About TV ad Spend?

Let’s look at the chart on the left where I plot the TV DTC spend as a percent of the total.

To prepare this chart, data for from sources #2 and #3 were used. Again, this illustrates the difference between the numbers reported by Kantar and Nielsen, at least as reported in the sources cited.

The other points all come from Nielsen data. So, point A is consistent with that data and I stick to my previous blog post when I said “Pharma Ups Its Investment in TV DTC Advertising.”

I wish, however, that I had access to 2014 Nielsen data regarding the Internet. If you have a source for that piece of data, please let me know.