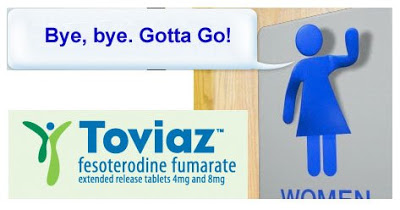 “You won’t have bathroom lady to kick around anymore because, gentlemen, this is my last DTC appearance,” said the iconic Detrol spokesperson.

Yes, Detrol is joining the growing legion of off-patent medications. Pfizer, however, is replacing $1.2 billion blockbuster drug Detrol, with Toviaz, a “new” treatment for “overactive bladder.”

Not only is Pfizer jettisoning the blue DTC icon, but it also intends to use a new marketing approach where drug reps won’t be focused so much on the features of the product in discussions with physicians.

“In the old world, [sales reps] might have come to talk with the doctors about the features of the product,” he [Jim Maffezzoli, senior director-marketing in Pfizer’s new primary-care unit, which is marketing the drug] said. “Now they’ll be talking about the product and also the YourWay plan.” He added that it is “emblematic of the primary-care business unit to try and bring solutions to the physicians vs. simply coming to physicians with a new product.” (See “Pfizer’s Prescription for Patent Loss: New Drug“).

Toviaz, however, is perhaps just a repackaging of Detrol and not really a “new” drug as the Advertising Age article cited above claims in its headline.

“Toviaz is structurally related to Detrol but has two doses instead of one, Mr. Maffezzoli said, giving physicians and patients more flexibility in treatment for the drug’s efficacy and tolerability,” said the article.

Taking advantage of my graduate degree in biochemistry from Columbia University, I decided to take a look at the molecular structures of these two drugs and see how similar they actually were. The following were copied from the package inserts:

Hope this doesn’t bore you, but these two compounds are pretty closely related and it looks like it was a “no-brainer” to convert the Detrol molecule to the Toviaz molecule: merely an “esterization” of an -OH group and an oxidation of a H3C group to an ethyl alcohol group. The whole thing was then combined into a different salt configuration using the fumarate salt instead of the tartrate salt.

Not so “innovative” in terms of R&D. A college chemistry major could easily do the conversion in a minimally-equipped lab.

Marketing, however, is a whole ‘nother story!

“The somewhat snarky Toviaz ads, which will appear in TV and print and as online banners, target women with questions such as ‘Does running to the bathroom count for a good portion of your cardio?’ and ‘Do you feel like kids and careers are far less demanding than your bladder?’,” says Advertising Age. “All feature the prominent tagline, ‘Time out. It could be overactive bladder.’ Pfizer will experiment with out of home, too, placing ads on grocery carts and in women’s bathrooms. There is a consumer-facing informational website as well, at overactivebladder.com. Toviaz.com, the official website for the drug, is set to launch in May. A brand campaign for Toviaz will unfurl later this year, but Mr. Maffezzoli declined to furnish details.”

I am sure the brand campaign will make a big deal about how “new” and “improved” Toviaz is versus Detrol. And to think that the FDA’s PRECIOUS time was wasted in approving this “new” drug! What a travesty!

Is Martin Shkreli a Psychopath?