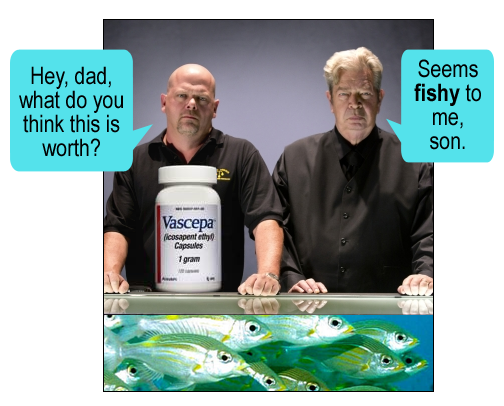 Cable-TV star Rick Harrison (host of the show Pawn Stars) is now officially a celebrity spokesperson for Amarin’s Omega-3 Vascepa brand Rx drug. A few minutes ago, Harrison made the official announcement via his @GoldSilverPawn Twitter account, which has over 155,000 followers:

“Excited to share my story of lowering my very high #triglycerides through the new Lower My Trigs campaign: http://bit.ly/1uXxUSP #spon”

“If I hadn’t checked with my doctor, I would have made the mistake many make, thinking dietary supplement omega-3s are actually over-the-counter drugs,” Harrison says in a video on the site LowerMyTrigs.com, adding that Pawn Stars teaches that “knowing what’s valuable and authentic is important to success.”

As part of the campaign, Harrison compares checking with his doctor about the value of Omega-3 fish oil products to asking a baseball expert if a bat was used by Mickey Mantle to hit a home run. “Make sure to check the facts,” says Harrison.

But like many patients Harrison might have asked a relative for health advice. He often asks his dad for advice on Pawn Stars. That crotchety elder Harrison — with his years of experience — might have pointed out the “fishiness” of the claims made by Amarin (via Rick the younger) with regard to Vascepa versus off-the-shelf omega-3 fish oil supplements and other prescription fish oil products like Lovaza.

In that video on the lowermytrigs.com site, Harrison also says “There are BIG [his emphasis] differences between a prescription EPA omega-3 product and one of the hundreds of supplements you buy off the shelf … When I spoke to my doctor, I liked what heard about EPA-only Vascepa. Vascepa is unlike any other prescription, triglyceride lowering omega-3 product in that it does not include DHA, which has been shown to increase BAD [his emphasis] cholesterol. And I wasn’t going to be fooled by taking a product that would raise my bad cholesterol.”

Aramin is trying to both position Vascepa as different from off-the-shelf products and Lovaza, which is the market leader among Rx omega-3 meds, by stressing the fact that it does not contain DHA and implying that it won’t raise your “bad” cholesterol levels.

I did a little research and found some information about studies comparing EPA and DHA (see “DHA and EPA Have Differential Effects on LDL-Cholesterol“). While it has been shown that DHA does increase LDL cholesterol, the increases are modest: 5.4% to 16.0% vs control. EPA itself has not been shown to do that. But is this a significant difference?

If Harrison had asked Dr William Harris (University of South Dakota, Sioux Falls) about this issue, that doctor may have told Rick what he told WebMD: “People have been trying to figure whether it’s one fatty acid or the other causing the increase in LDL cholesterol,” said Harris. “In the context of where we usually see it, it’s in patients with very high triglyceride levels, but their LDL-cholesterol levels can often be abnormally low to start with, so it goes up to normal. It often looks like a large relative increase, but nevertheless, I’m not too concerned about it.”

Then what would have Rick done? Asked his daddy?