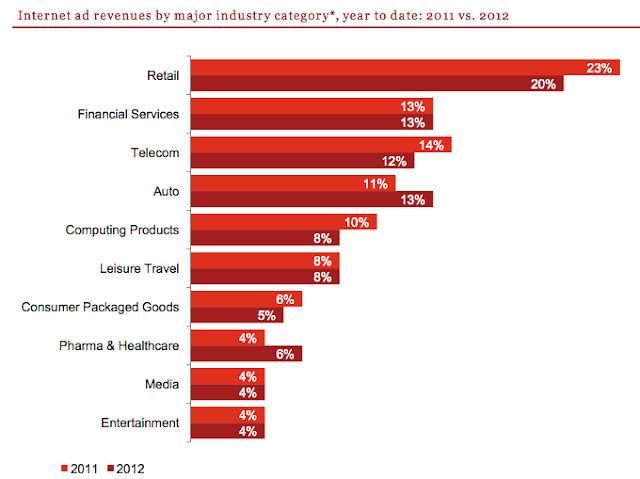 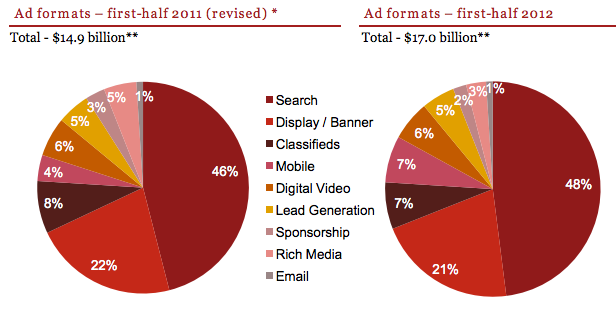 Online ad spending by “Pharma & Healthcare” increased by 50% (from 4% of the total to 6% of the total). Keep in mind that not all of this is specifically spending by the Rx drug industry because the category includes “pharmaceutical products, facilities, services, researchers, and biological products. Also comprises establishments providing healthcare and social assistance for individuals as well as personal care, toiletries, and cosmetic products.”

eMarketer has predicted that online ad spending by the health industry in 2012 will be $1.58 billion (see “Bogus Predictions of Pharma Industry Online Ad Spending“), which is significantly different than the IAB guesstimate 0f $2.04 billion based on the data for the first 6 months.

Why the difference? It could be that eMarketer is measuring something different. However, its 2011 number of $1.28 billion is virtually the same as what IAB said the healthcare industry spent online in 2011 (4% of $31.7 billion equals $1.27 billion).

$1.58 billion, $2.04 billion — whatever. Pharma’s share of that ad spend is probably 50% or $0.8 to $1.0 billion. Taking out the 48% attributed to search, we get $0.38 to $0.48 billion spent on other types of online advertising. This compares to about $4 billion pharma spends on all direct-to-consumer (DTC) advertising — a number that does not include the online spending of any sort. In other words, online ad spending by pharma is still insignificant compared to offline ad spending.