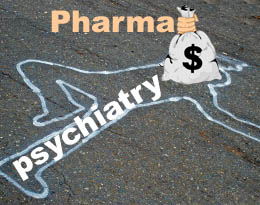 British psychiatrist and “Big Pharma gadfly” David Healy argued that his profession is “committing professional suicide” by failing to address its dangerously close relationship with the pharmaceutical industry. He made his argument speaking at an annual meeting of the American Psychiatric Association during a “well-attended session on conflicts of interest” according to this article.

Dr. Paul Appelbaum, a past president of the APA and director of Columbia’s Division of Law, Ethics and Psychiatry cited a study that showed “only 34% psychiatrists believe that receiving food or gifts affects their own prescribing patterns, 53% believe that it influences that of their colleagues… Research shows that this type of thinking — ‘Everyone else is prone to biases and social factors, but not me’” — is common and confounds attempts to address conflicts.’At least some of our colleagues are wrong,’ Appelbaum said drily of the study.”

Healy offered some advice for how his profession can put some distance between it and the pharmaceutical industry.“The key issue in the short term is access to data. We have to insist on that,” he said. “We let industry come to our meetings and let them talk in our programs. I don’t think it’s huge problem that they get paid. The big problem is that if you ask for data, they can’t give it to you. That’s not science, that’s marketing masquerading as science.”

Daniel Carlat, M.D., director of the Pew Prescription Project, organized the session. Carlat once characterized pharma-sponsored Continuing Medical education (CME) as “a new twist on that well-known instrument of corruption, money laundering.” Listen to the following podcast interview of Dr. Carlat on that issue: