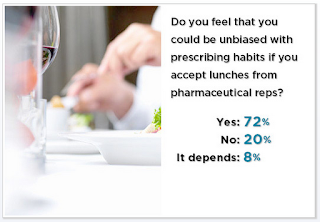 Medscape’s 2012 Ethics Report survey revealed that 72% of 23,710 physician respondents answered “Yes” to the question “Do you feel that you could be unbiased with prescribing habits if you accept lunches from pharmaceutical representatives?”

First, it’s interesting that this question was included in a survey that purports to investigate “Physicians’ Top Ethical Dilemmas” along with questions involving insurance fraud, physician-assisted suicide, and abortion. But it certainly has generated buzz and blog posts such as this one and this one.

Some states, however, have enacted laws that are more prohibitive than PhRMA’s code. But these laws have had an impact on local businesses (i.e., restaurants that serve the meals). In response to pressure from pharma, physicians such as the 72% above, and local businesses, Massachusetts recently decided to “scale back” it’s anti-free-lunch-for-physicians law. Instead of outright banning of gifts like free lunches, Massachusetts now allows physicians to receive “modest meals,” which is more in line with PhRMA’s code.

The physician payment sunshine provision of the Affordable Care Act, however, will eventually reveal just how much pharma companies spend on feeding physicians. “Food” is one of the 15 or so “categories of payment” that pharma must report.

Some of the comments from physicians in the Medscape survey include:

Taking the “Cool” Way Out of Having Rx Product Convos on...