According to results of the recent Pharma Marketing News 2005 HOT ISSUE survey, drug prices, declining profits, and dwindling pipeline of new drugs are the top issues that will have the most impact on the pharmaceutical industry in 2005. See results charted below. 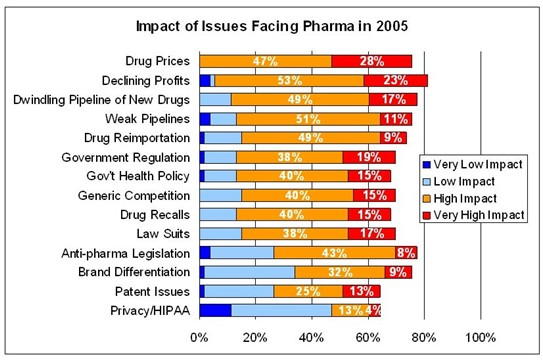 Obviously, the marketplace has changed in the past year. Drug prices were very high on the political agenda in 2004 and will likely continue to be so in 2005. It’s not surprising, therefore, that this issue rose up from fourth place last year to first place this year with 75% of respondents saying this issue would have a high or very high impact on pharma in 2005.

Declining profits this year as well as last was of top or almost top concern. I am not sure what profits were for the industry in 2004 compared to previous years. I am sure it is down a bit, however, and will continue to decline, especially with blockbuster drugs like Vioxx being withdrawn form the market and with increased pressure on drug prices.

Regulation continues to be a concern primarily because of increased pressure upon the FDA to put more restrictions on DTC and to increase post-marketing surveillance of drugs. This may or may not lead to new legislation.

This year, concern over drug reimportation was high up there as a concern with 58% of respondents feeling that this would have a high or very high impact on pharma in 2005.

[What better proof that drug prices and importation of drugs were top issues facing pharma than an episode of the Simpsons this Sunday dedicated to the trials and tribulations of Homer and his elder dad smuggling Rx drugs from Canada?

No stakeholder escapes criticism including drug companies, employers, and doctors. Dr. Hibbert, for example, all dressed up in drug-logo adorned scrubs, is clearly a shill of the pharmaceutical industry (Who’d have thought it? Surely, Dr. Nick Riviera would have been suspect, but Dr. Hibbert?).

Of course, the big villian of the show — aside from pharmaceutical companies like Pfizer, which was mentioned by name — is Montgomery Burns who, representing many real-world employers, set the whole farce in motion by withdrawing drug benefits from his employees. Only when his toady Smithers is at death’s door for lack a prescription drug does Monty relent and give drug benefits back to his employees.}

Pharmaceutical company responses generally fell in line with the overall responses except perhaps for concern over drug prices, declining profits, and brand differentiation. Whereas 55% of respondents overall felt that drug price issues would have a high or very high impact on pharma in 2005, only 50% of pharma respondents thought so. Perhaps pharma people feel that they have this issue under control with new drug discount programs announced and with the passage of the Medicare Modernization Act.

Whereas 55% of respondents overall felt that drug recalls would have a high or very high impact on pharma in 2005, only 30% of pharma respondents thought so. This might reflect a “can’t happen here” syndrome.

Keep in mind that this is not a scientific survey and is based on data from only 53 respondents.