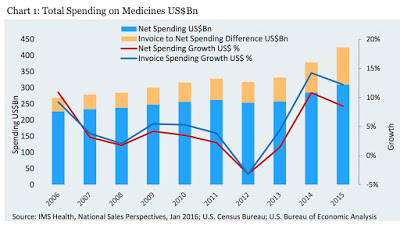 Total spending on medicines in the U.S. reached $310 billion in 2015 on an estimated net price basis, up 8.5 percent from the previous year, according to a new report issued today by the IMS Institute for Healthcare Informatics.

According to IMS, the increase was driven primarily by a wave of “innovative” new medicines. Let’s take a closer look at the data.

Spending on specialty medicines has nearly doubled in the past five years, contributing more than two-thirds of overall medicine spending growth between 2010 and 2015. Overall, 2015 saw a 21.5 percent spending increase for specialty medicines to $150.8 billion on an invoice price basis. Nearly 250,000 new patients received treatment for hepatitis C in 2015 , a 46% increase from 2014. But “patient new therapy starts peaked in March 2015 and have started to slow as the bulk of warehoused patients have sought and received treatment,” notes the report.

Much more data can be found in the report, “Medicines Use and Spending in the U.S.: A Review of 2015 and Outlook to 2020”, which you can access here.