Yesterday, I posted a commentary about the imagery of the new DTC ads for Rozerem, a sleep aid drug from Takeda Pharmaceuticals (see “Rozerem Ads Dis Lincoln, Show Beaver“). I was mostly confused by the meaning of the imagery, especially the beaver. Several people submitted comments about that post here and over at the Pharma Marketing Online Discussion Board. Before getting to these comments, I thought it would be interesting to examine other creatures, real and imaginary, that inhabit the world of pharmaceutical DTC advertising (see figure below). 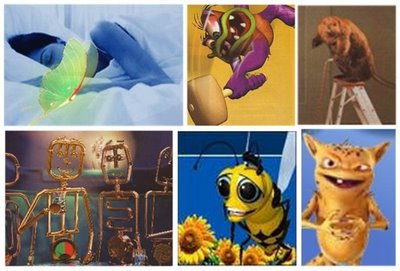 You are probably familiar with these denizens of the DTC netherworld. The Rozerem beaver and the Lunesta moth are the latest inhabitants to come on the scene. These creatures have become icons for their respective products.

To be sure, other consumer products use animals in their ads — Coca Cola uses polar bears, Energizer uses a bunny, Budweiser used to use lizards, etc. Here’s what “world-renowned marketing strategists” Laura and Al Ries have to say about “The Zoo on Madison Avenue”:

“Are animals in advertising good or bad? Like every question in marketing, the correct answer is always the same: it all depends.

These experts claim that the use of animals in ads is the result of “creative thinking” at ad agencies. To be really creative, the ad agency must come up with an animal no one else is using. Hence, the beaver in the Rozerem ads.

Brian Towell across the pond at doghouseonline.com rationalized the choice of beaver thusly:

“While a beaver may be a questionable choice, there is probably no harder working or more industrious animal (apart from bees and ants which are far more threatening/nightmarish) on the planet. So we have the combined virtues/analogies of honesty and industry working together to give us a good night’s sleep.”

Which just goes to prove the Ries’ point: the bee was taken (Nasonex) — and so was the ant (ReQuip) — so the logical next choice was the beaver!

But, as I suggested in my post yesterday, the beaver also conveys another message. As one anonymous commenter said:

I don’t like the talking beaver either, but its use seems obvious to me (as a male) — the guy dreams about “beaver,” aka sex. It’s exactly the politically incorrect interpretation John alludes to. And yeah, it’s pretty hokey when you think about it. Too clever by half. What’s next, a train?

Mascot Giveaways
I think, however, that we read too much into it when we try to psychoanalyze the reasons why certain animals or creatures are chosen for drug ads. The more important purpose is to create a mascot that be a surrogate for the product, especially as gifts to physicians. I imagine little beaver statuettes on the desks of physicians. The beaver puts a smile on the doctor’s face (especially male doctors) and reminds him of the product and the rep who gave him the gift. Of course, it’s not going to influence what he prescribes, but it got the rep through the door and the doctor might agree to see him again. 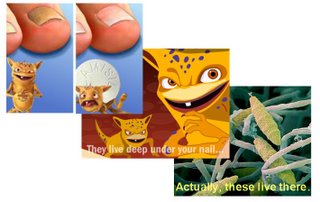 Take a look at “Digger the Dermatophyte.”

Digger looks nothing like an actual dermatophyte. But it is kind of “cute” and a character that can easily be converted into a promotional item as a giveaway for physicians. BTW, how many consumers actually believe dermatophytes resemble “Digger?” I am betting quite a few.

Other Comments About Rozerem Ad Campaign
Several people over at the Pharma Marketing Online Forum felt that the Rozerem advertising was effective (especially the Web site).

Your comments about lack of space devoted to safety information is well-put. Lunesta looks like a great drug until you read the fine print about comas.

But the fact is, this web site [Rozerem.com] works on a few levels brilliantly. The content is excellent. The personalities engaging. The overviews thorough. It’s pharma speaking to me in an engaging and approachable way — wow, they recognize me as a human!

What is most interesting is the integration of video into the text — I think a first for a pharma brand. This is radical for pharma because it makes their communication go beyond the myopic “pill-to-person” model which is so flat and artificial and in many instances alienating.

This humanizes the information and differentiates the brand from other sleep aid sites. It taps into how people are starting to consumer other information — the CPG marketers get this already and are moving all their communications to be more interactive and engaging. But pharma is barely past brochure-ware educational experiences.

This campaign may have its issues, but the Web site is outstanding. Congrats to the agency and client!

I think this is OK. It connects with me in a number of levels, some of them very obvious, others quite subtle.

While a beaver may be a questionable choice, there is probably no harder working or more industrious animal (apart from bees and ants which are far more threatening/nightmarish) on the planet. So we have the combined virtues/analogies of honesty and industry working together to give us a good night’s sleep.

On a more disturbing level, while the copy promises little in the way of dependence/addiction, the imagery makes an unnerving inference of weird/hallucinogenic (but non-threatening) dream states.

That will probably be good for sales, so I congratulate the Agency and the brand team at Takeda for a job that is, on the face of it, well done.

A recent discussion with sleep disorder experts has postulated that dreams (apart from the unconscious valeting role) also function as guardians of sleep, so the relevance of the simple creative idea is also profoundly ‘real’ to people who lose sleep.

For once, a healthcare campaign that deserves to be applauded.

Blog commenters were a little less appreciative. Here are a couple:

OK. I just visited the website – haven’t seen the print or TV versions. The beaver is freaking me out. I might just have nightmares tonight thinking about it. I agree – they should have thought about this a little more before launching this campaign. Then again, maybe in a crowded sleep market they are looking for something different to create buzz. However, as you pointed out, the market that will think this is cool/funny/hip is probably not in need of insomnia medication. I am!

The photo seems to me to be some ad person’s notion of what constitutes a Freudian dream, which tells me how hokey is the thinking of some ad people.

Re the clock [on the Web site, displaying the real time vs. perpetually set at 3 or 4 AM]. But if you are among the target, maybe their thinking is the clock will show you 2 AM, 4 AM… whatever it is when you are awake surfing the web, not sleeping. I am not saying that’s right, just trying to figure what the logic is. Ambien runs a lot of ads in the middle of the night. Hits the target. Maybe rozerem will or is running online or tv ads in the night with a call to action to go to the website. could be pretty productive. Or a programmer did the clock on her own initiative and no one in marketing management noticed it, or they did notice and got overwhelmed with “how freaking cool our website is…” It’s a pitifully easy tool to implement

Bad Buzz
At least one commenter noted all the buzz the Rozerem ad imagery has created and therefore suggested that it has achieved its purpose. Al and Laura Ries would say that only PR can create buzz, not advertising. I would say that yes, it has created some buzz here and among advertising professionals (the Rozerem ad agency is probably patting itself on the back right now), but where’s the buzz among consumers? Maybe the Wall Street Journal or New York Times will pick up on this discussion and write a story. It could be a negative story, however. That is, it could be “bad buzz.”

In my opinion, the Rozerem ads are likely to generate more “bad buzz” than good buzz. I don’t think the industry needs any more “bad buzz” about DTC advertising. Unless you think that ALL buzz — good or bad — is productive, then drug advertisers should spend less time trying to be creative and more time being communicative — ie, better communicate what’s special about Rozerem. IMHO.

Let’s Focus on Effectiveness, Not Dollars Spent as a Measure of...