“The impact of DTCA [Direct-to-Consumer Advertising] on patient expectations has important implications for evaluating its role in the health-care system. While these expectations can lead to inappropriate and excessive prescribing, they also may induce a placebo effect that might increase the clinical effectiveness of the advertised products. [my emphasis] This seldom-discussed effect of DTCA should be taken into account in discussion of policy approaches to this form of marketing.” (See “What Are the Public Health Effects of Direct-to-Consumer Drug Advertising?” in the March issue of PLoS Medicine.)

I haven’t heard that one before!

It should be noted that of the two authors of this statement, Elizabeth A. Almasi and Randall S. Stafford, at least one (Stafford) has received financial support (of the worst kind) from several pharmaceutical companies: “RSS has received current or past research funding from Merck and Company, GlaxoSmithKline, Bayer, and Proctor and Gamble. Speaking honoraria and travel expenses [my emphasis] have been provided by Merck and Company, Bayer, and GlaxoSmithKline.”

I say the “worst kind” because on the gifts-to-physicians-conflict-of-interest-scale, payment for speaking and travel signifies the highest conflict. For more on this, see “Gifts to Physicians Survey Results” and “Free Gifts to Physicians: What’s the Big Deal?” (PMN Reprint)

The other author, Elizabeth Almasi is a student at Stanford University presumably working under the tutelage of Stafford. The research that led to this thesis was paid for, however, by grants from the US government.

The placebo effect is a known factor in healthcare: “about one-third of patients report relief from postoperative pain, cough, headache, depression, and other conditions when given a placebo,” say the authors. OK, I’ll buy that.

Of course, in order for a DTC ad to trigger such a placebo effect, the ad must show how effective the product is, even exaggerate that effectiveness. The authors site an example of such an ad:

“DTCA offers conditioned stimuli to associate each product with positive emotions: the joy of playing in beautiful fields for allergy sufferers (loratadine commercial) or the relief conveyed by elderly patients with arthritis participating in their favorite activities (rofecoxib commercial). Patients who take the advertised medication may be conditioned to elicit the positive feelings that were portrayed in the advertisement, which could enhance the medication’s clinical effect.”

Such ads have been widely criticized — and some have resulted in FDA warning letters — for going over the top as far as fair balance is concerned. For example, according to Mark Nolan, senior VP, creative director, Medical Broadcasting Co., a more respectful approach to conveying the fair-balance information in DTC ads emerged in 2005. “For so long we were treated to the smiling happy people dancing through a field of flowers every time we heard the fair balance,” he says (see “DTC Takes a Back Seat” in MedAd News). But that’s not all, DTC ads once showed arthritis sufferers skateboarding (I believe it was a skateboard) after taking a well-known Rx product!

Recently, there has been a shift by drug advertisers to use physicians as authority figures in broadcast TV ads. The Otho-McNeil ad for Ortho Evra is an example (see “DTC Straight Talk“). This has been characterized as “creative” (see “DTC Takes a Back Seat” in MedAd News), but it could also be a deviously clever ploy to enhance DTC’s placebo effect!

It always amazes me how intelligent DTC ad people are! Imagine having developed techniques that not only motivate people to see their doctors, but that also draw upon classical conditioning theories to increase the placebo effect of the advertised product?

Actually, I don’t think the ad people are that smart or even that devious. However, I can envision some of them applying Pavlovian conditioning theory to ads after reading the Almasi and Stafford paper. For that reason, the pharmaceutical industry should strongly rebuff the DTC placebo effect theory. Besides, the industry prides itself on producing products that are at least somewhat better than placebos!

DTC Takes a Back Seat?
In the report about DTC previously cited, experts claim that in 2006, DTC ad spending will shift somewhat away from branded ads to unbranded disease awareness ads, from TV to the Internet, and from the consumer to the patient. The report also cites a survey predicting that DTC spending will be flat or decrease somewhat in 2006 vs 2005. 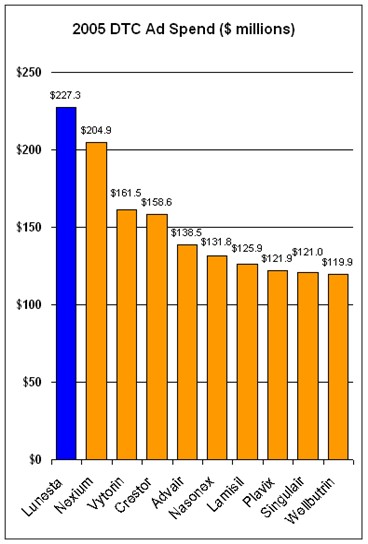 I note with interest that Sepracor’s Lunesta was the product most advertised to US consumers in 2005. And, in 2006, it is being advertised in violation of PhRMA’s Guiding DTC Advertising Principles, which Sepracor pledged to obey (see “Wake Up PhRMA! or Tilting at Windmills“).