The Wall Street Journal reports today that all is not well in the impotence-drug market.

“The growth since the competition came to the market has been modest and below expectations for the entire class,” concedes Patrick Holmes, a Pfizer marketing vice president for drugs including Viagra. [See “Demand Lags For Viagra And Its Rivals“].

This is despite huge amounts of money spent on DTC (direct-to-consumer) advertising for these drugs. Cialis and Levitra are #2 and #4 in terms of dollars spent on DTC in the first and second quarter of 2004. According to TNS Media Intelligence/CMR, Cialis’s ad spending was $137 million for the first 10 months of 2004, followed by $133 million for Levitra, and $88 million for Viagra. (Viagra was much lower perhaps because of FDA criticisms of Viagra ads — namely omission of risk information. See letter from DDMAC to Pfizer.] 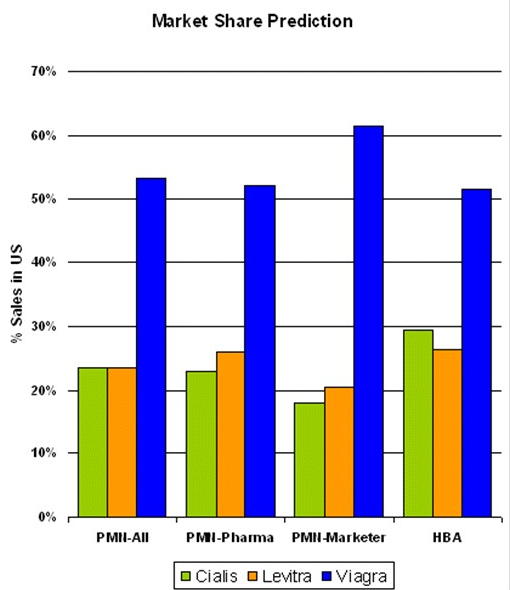 In February, 2004, Pharma Marketing News hosted a survey entitled “Cialis/Levitra/Viagra: Which Ad Campaign Has the Greatest Staying Power?” where we asked experts to determine the market share for Viagra, Cialis, and Levitra in six months. The predictions — shown on the left — have proven to be pretty accurate. According to data quoted in the WSJ article, Viagra had a 65% share in Oct/Nov 2004, whereas Cialis had a 21% share and Levitra had a 13% share. By all estimates, Levitra should have done better.

Lack of DTC Outside US the Culprit?

A Glaxo spokeperson in London claimed that it was tough to sell the drugs without the help of consumer advertising. That may be true. In the US, where DTC is allowed, some data does seem to indicate a blip in new prescriptions written for Cialis after the 2004 Superbowl ad (see “The New Written Prescription: Leveraging Technology to Measure Change in Physician Behavior as it Occurs“). However, it is difficult to separate DTC promotions from other types of promotions — such as details to physicians — and say with certainty that any increase in Rx writing is due to the ad rather than something else.

Perhaps Not As Many Men Have a Problem As Drug Companies Would Have Us Believe?

I remember being at a conference during which a presentation by the Cialis marketing director suggested as many as 1 in 2 men over 40 in the US suffer from some degree of Erectile Dysfunction. I looked at the guy on my right and the guy on my left and said “one of these guys can’t get it up!”

Pfizer, in its FAQs on ED, says: “About 30 million men in the United States suffer from some degree of ED, including about half of all men aged 40 to 70 years.”

The WSJ article dutifully repeats this estimate: “Some estimates put the number of U.S. men with problems attaining or maintaining erections at 30 million.” Where did they come up with this number? Well, they don’t say; could it be Pfizer? Or perhaps some independent expert? In the next sentence the Journal authors quote Andrew R. McCullough, a urologist at New York University medical Center. The close proximity of an expert with data suggests a link between the two. Is this expert credible?

Just keep in mind that Dr. McCullough, according to Target Health, Inc. where he is an advisor, “has been principle (sic) investigator in numerous clinical trials in erectile dysfunction including the pivotal sildenafil trials. Currently he is conducting ED trials with Bayer, TAP, Liliy-ICOS and Pfizer … and has served as a high level advisor and expert to many companies including Pfizer, Bayer, Bristol Meyers Squibb, Vivus, Schering-Plough, Smith Kline Beecham, and TAP.”

NOTE: Some interesting data from Pfizer concerning Viagra was cited in a WSJ article published after I made this post (see “Medicare Plan to Cover Viagra“; WSJ, 2/3/2005). According to these data, the majority of Viagra prescriptions (61%) have been written for men UNDER 60: “Since it was approved by the FDA in 1998, about 16 million men have tried Viagra, according to Pfizer. Overall, according to a spokesman for Pfizer, men ages 60 to 69 account for about 22% of prescriptions for the medicine, while those 70 and over account for about 17%.”

I think the marketers are drinking their own Kool Aid. They have overestimated the market and tried to put too many men in the ED category. Many men may have an inconsistent ability to achieve an erection or a tendency to sustain only brief erections, but they would not want to say they are “impotent,” which is what ED implies. The ads, of course, skirt the issue by mentioning “ED” as quickly as possible so as not to call attention to it. This is why TV DTC cannot do the whole job. There needs to be more education. See yesterday’s comments (“The End of DTC as We Know It“) for more about that!