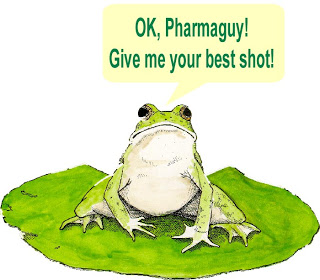 Eli Lilly just joined the ranks — more like single file — of drug companies that have corporate blogs. Lilly calls their blog “LillyPad,” a name that my Twitter pal Andrew Spong says is “an eye-roller, not an eye-catcher” (see LillyPad flops into the pharma blogosphere). Rich Meyer, another Twitter pal of mine, asks “Lilly launches BLOG but who are they trying to talk to?“

They’re talking to ME, Rich!

So far there have been two blog posts made by Lilly that got me juiced up enough for me to submit a comment. One post was about the dismay state of math and science education in the US (see The Importance of Science and Math Education) and another was about counterfeit medicines found on the Internet (see Efforts to Stop Counterfeit Medications).

Lilly, like me, wisely moderates comments that people submit to LillyPad. So there was a short delay before my comments appeared on the blog.

In my comment about math education, I related a personal story about a teacher who told my son that “both” ways of plotting ordered pairs of numbers were correct. You’ll have to read my post to get the details of why this upset me so much. A former teacher replied to my comment and confirmed that “Degree requirements for teaching math at the elementary school level are minimal.”

Rich would rather see posts to LillyPad made by “John” — Lilly’s CEO — and by brand leaders rather than corporate PR people who are currently submitting the posts.

Frankly, CEOs and brand leaders bore me — they are the real hacks who can never carry on a real conversation. The former always has to paint a rosy corporate finance image for investors and the latter would just spout package insert gibberish.

The notion that pharma companies should only speak to one audience to speak to — ie, their customers (patients and physicians) — is limiting. Big pharma companies like Lilly have thousands of employees and a blog is a good way for the company to keep them informed about all the good things their company is doing. Most employees know what the company is doing around health issues, but employees have other interests that motivate them. Perhaps there are employees who want to get more involved in math and science education initiatives and may get motivated by Lilly’s post on the topic — maybe even push Lilly to do more.

Of course, Lilly also lobbies in state and US legislatures. A blog is also a good way to bolster those activities.

LillyPad is off to a good start, having fostered 2 or 3 conversations. Of course, I started two-thirds of these conversations and my attention span is notoriously short: I haven’t been following other pharma corporate blogs and I don’t expect to be visiting LillyPad that often either. I will, however, add its RSS feed to the News Direct from Drug Industry Forum, which aggregates newsfeeds from many pharma industry sources. That way, whenever a new post is made to LillyPad, I will be notified by email.

Viagra Print Ad Art Imitates Life as it Could be Without...