Seems like a lot of Harris/Wall Street Journal polls are crossing my path lately (see, for example, “Doing a Good Job but Still No Respect!“). The latest one, about the public’s rating of the job FDA is doing, was reported yesterday in the Wall Street Journal (see “Americans Growing Less Confident In FDA’s Job on Safety, Poll Shows“).

In 2 short years — between 2004 and 2006 — the public flipped from positive to negative on its perception of how well the FDA is doing to ensure the safety as well as efficacy of new prescription drugs (see chart). 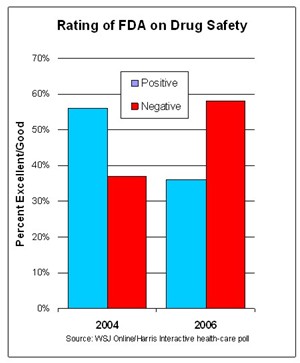 This reversal of fortune might be easily explained: Vioxx happened and the FDA was publicly raked over the coals for a time by the Senate and the press. The latest rake was by the Government Accountabiliy Office (see “Spinning Bad News about FDA & Drug Safety“)

The FDA, however, proved resilient and shrugged off making any real changes to shore up its oversight of drug safety. First, it quietly scrapped its plans for a “Drug Watch” web site, which would have kept the public up to date on “Emerging Drug Safety Information.”

It also started cranking out more “Warning Letters” to manufacturers. In the first quarter of 2006, for example, the FDA issued 6 such letters (see Table complied by EyeOnFDA). If this rate continues, there will be 24 such letters issued this year compared to about 19 last year. Interestingly, every warning letter cites “omission” or “minimalization” of risk information as an infraction.

[If you want to keep track of warning letters written and other issues related to the FDA, I highly recommend the Eye on FDA Blog.]

While the FDA issues record numbers of warning letters about omission of risk information in drug promotions, the advertising industry calls upon the FDA to change its regulations so that even less specific risk information need appear in ads (see “DTC Without the Risk“). You can read a very interesting dialogue about this in the March 2006 issue of Pharma Marketing News (available for a limited time).

94% of respondents to the poll said it was very or somewhat important (75% said “very important”) to them to have access to “Complete information about the safety issues associated with prescription drugs.” Organizations like the Coalition for Healthcare Communication would say that the public has enough access to this information from a variety of sources and there is no need for DTC advertising to be burdened with it.

BTW, FDA Warning Letters are like closing the barn door after the cows have already left. The offending ads have already run and the promotional pieces have already been printed and mailed. The letters are addressed to the companies’ CEOs as if that would make a bigger impression! The CEOs probably treat FDA letters much like the CEO of Sepracor treated my letter about his company’s violation of the PhRMA DTC guidelines — they basically ignore them! Oh yeah, they may mention in passing to the product manager: “Bad boy! Now stop that.”

Politics
The poll also revealed that most people feel that the FDA are influenced more by politics than by science. 82% felt the FDA was greatly or to some extent influence more by politics. More declared Democrats felt this way than Republicans (87% vs 77%).

THIS JUST IN: Poltics undoubtedly was involved in the decision by the FDA (or should I say by the then FDA acting commissioner Lester Crawford) to withold approval of Plan B (see “Plan B FDAgate“). Also see “FDA chief took over Plan B.” Testimony from FDA officials claerly indicate that politics more than science were involved.

What it Means for Pharma
Pharma needs to do a better job communicating risk information in DTC advertising and encourage and help the FDA frame guidelines/regulations for doing this. It should resist the suggestions from ad agencies to limit the communication of risk information in ads. Agencies are more concerned about crimping their creative style than in creating effective patient communications. IMHO.