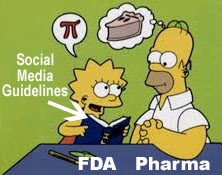 The U.S. Food and Drug Administration today announced the launch of an educational initiative to assist the U.S. pharmaceutical industry to correctly interpret and implement recent social media and document submission guidances published by the Center for Drug Evaluation and Research.

The “C’mon! It’s Simple!” campaign is the FDA’s first of several planned social media education campaigns using the new authority granted under the For Gosh Sakes, It’s Not Rocket Science Act, signed into law by President Obama in 2013.

“Pharmaceutical use of social media is minimal,” noted Thomas Abrams, Director of the Office of Prescription Drug Promotion (OPDP). “While the industry often blames lack of guidance from the FDA as a major cause of this situation, we feel that the industry simply does not get it. They just don’t understand what’s in the guidance we’ve already published. What’s the sense of publishing guidelines if they are not correctly interpreted by the industry? I tell you,” bemoaned Abrams, “we’re thinking of not publishing any further guidance until the industry at least posts some comments and questions to the current docket so that we can respond and educate them.”

While the drug industry typically submits comments and questions at EXACTLY one minute before midnight of the deadline, the FDA has decided to be pro-active and develop a series of Q&A’s that anticipate what the industry should be asking about recent guidance.

The “C’mon! It’s Simple!” campaign uses a comprehensive multimedia approach, compelling facts and vivid imagery designed to educate over time using real-life scenarios – or what could be real-life scenarios if the drug industry had a better understanding of the guidelines.

In one scenario, “Joe Johnson,” a fictitious paid spokesperson of Pfastraglax, a fictitious pharmaceutical company, posts a Pfastraglax product message on his personal Facebook page. Is this reportable according to “Guidance for Industry Fulfilling Regulatory Requirements for Postmarketing Submissions of Interactive Promotional Media for Prescription Human and Dog Drugs” that was published by FDA in January, 2014?

“It has come to our attention,” said Abrams, “that this same scenario recently was published in Pharma Marketing News, a leading online industry publication (see “Questions Raised by FDA Guidelines with Answers, Sort Of”). Unfortunately, the lawyer presenting the scenario in this article vacillated between ‘probably reportable’ and it ‘may not be reportable.’ Lawyers! Pharma can’t live with them and Pharma can’t live without them! Am I right?”

“C’mon! It’s Simple!” will provide definitive, actionable answers to such questions using several social media platforms to create space where industry regulatory professionals can engage in peer-to-peer conversations about the issue in ways that are authentic to who they are.

Supported by the best available non-legally binding opinions from OPDP, the “C’mon! It’s Simple!” campaign will be evaluated to measure its effectiveness over time. It is the first of several campaigns that the FDA will launch over the next few months as new social media guidances are published. Subsequent campaigns will target additional discrete audiences, including so-called agency experts, pundits who endlessly blog about these issues, and lesbian, gay, bisexual, and transgender (LGBT) pharma product managers.

“The FDA has collaborated with some of the brightest and most creative minds to develop a multimedia initiative designed to make the target audience acutely aware of the guidelines by highlighting consequences that our pharma clients are really concerned about,” said Abrams.