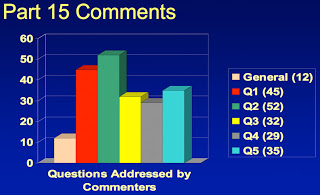 There is much speculation as to when the FDA will publish its first guidance for the drug industry regarding promotion via the Internet and social media. At several recent conferences, FDA officials have stated that they expect to issue some guidance before the end of the year (2010) and will likely issue several guidances addressing specific questions that were addressed at the November 15, 2009 Part 15 public hearing (see “I Predicted It: Social Media Guidance Likely To Be Split Into Multiple Documents“). Recall that there were FIVE questions that the FDA asked the public to comment upon:

Which question will FDA address first?

Perhaps FDA will address each question in the order that they were asked. After all, they must have had a reason for numbering them 1 through 5, right? Or perhaps they are so understaffed that they will have to address the easiest question — ie, # 4, IMHO — first in order to keep their “promise” of issuing some guidance before the end of the year. That would be bureaucratically correct, but NOT a wise move, considering that the drug industry has pretty much addressed that issue years ago without any help from the FDA. Also, the FDA, to my knowledge, has never issued an “enforcement letter” about linking.

I predict that Q2 — ie, the “space limitation” issue — will be addressed first. Here’s why.

First, let’s look at those enforcement letters. The following chart was taken from a presentation made by FDA’s Barbara Chong at the recent ePatient Connections 2010 conference (find it here). 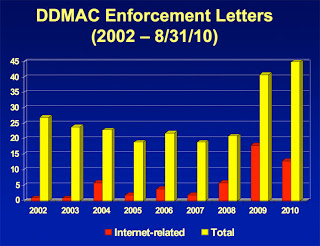 At least 14 of the 17 2009 letters (82%) that were Internet-related concerned the issue of space limitations specifically related to search ads. That was the shot heard round the pharma world. Because of that action by FDA, pharma drastically cut back on its purchase of Google Adwords, which may account for 40% of its online promotional spend. In fact, Google — in collaboration with the FDA — has come up with a solution to this problem, which the FDA is sure to endorse in its upcoming guidelines. The (beta) format has even been used by at least one pharmaceutical company and the FDA did not send out any letters regarding that use (see “Is Google the New FDA?“). In other words, FDA is primed to issue guidance backed by a real world example to illustrate how to apply the guidance. It’s a no-brainer as they say.

More important is the DEMAND for guidance on this issue. At the November, 2009, public hearing, the space limitation question was addressed 43 times by speakers, more than any other question (see chart below): 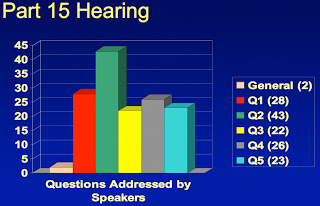 The same was true of comments submitted to the FDA as part of the public docket (see chart below):

In my survey of readers on this issue (see “Regulatory Solutions to Overcoming Space Limitations in Pharma Social Media Communications” and “Overcoming Space Limitations in Social Media“; use discount code ‘FDA397’), which I submitted to the public docket, there were 46 comments. Unfortunately, the FDA counts this survey only once in the above chart.

In the past, waiting for guidance for Internet promotion of Rx drugs from FDA was a bit like waiting for Godot. I joked that the industry is waiting for “Goduidance.” However, having guidance for addressing the space limitation issue — especially with regard to paid search advertising — is no joke for pharma marketers. The sooner the FDA issues that guidance and finalizes it, the better.

Are You Part of My Social Media Mosaic?