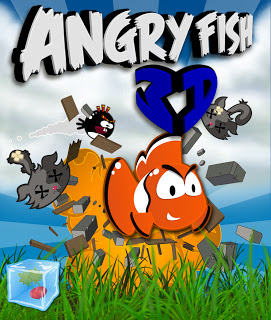 “Traces of human medicines could be damaging the ecology of streams and rivers, according to a Swedish study,” reported FT Science (here). Specifically, fish exposed to “relatively low concentrations” of oxazepam — a frequently prescribed drug used to treat anxiety — changed the fish’s behaviour, making them “bolder and less sociable.” Fish in the experiment had amounts of oxazepam in their flesh similar to wild perch in Sweden’s River Fyris.

“While alone, fish that were exposed to oxazepam dared to leave a safe refuge and enter novel, potentially dangerous areas,” said Tomas Brodin, the study leader.

I was able to obtain an artist’s rendering of one such fish:

Although researchers said oxazepam exposure might be harmful to the fish in the wild, they also admitted that the exposed fish “seemed much less stressed and scared,” which could be a good thing, especially if you want to knock down those underwater structures built by the CATS!

But all seriousness aside, this is a problem that should be dealt with. Either you can stop overmedicating people with drugs like oxazepam, or you can get your Congressman to support Obama’s infrastructure plan and develop sewage treatment plants that can capture environmentally hazardous drugs. Ha! Neither are likely to happen any time soon here in the U.S. Sweden? Maybe they’ll do the latter.

An Innovative System for Communicating Drug Risks to Patients