The recent post about the pharmaceutical industry “free lunch” program for physicians — see “Free Lunch for Physicians: Newsweek Misleads” — generated some feedback from members of the Pharma Marketing Online Discussion Board that I believe is worth repeating here.

[BTW, all this discussion may actually be benefiting vendors that help sales reps order and deliver lunches to physicians. You might see Google ads on this blog and on the Pharma Marketing Network web site advertising these services. You can also find a list of these vendors on the online Pharma Marketing Vendor Directory.

Keep in mind that these ads are delivered via Google based on the content of Web pages — I do not choose the ads. The most I can do is not allow ads from certain domains. My policy, however, is that unless an ad is offensive or not relevant to my readers, I leave it alone. In other words, these ads are NOT chosen by me purposefully to run alongside this commentary. Just for the record.]

Back to free lunches. Michael Weintraub had this to say:

“Pharma spends $30B annually on Marketing. About $10B of that goes to field force activities, including the cost to have 110,000 sales reps in the field, drug samples as well as pens, lunches, etc.

“However, bulk of cost is the Rep and samples, not the other freebies. Another $6B goes to DTC and DTP programs. About $1B for data and market research activities. The rest goes to all of their other Marketing activities. They spend about 12% of sales on Rebates, so that’s as big as marketing spend. They also spend slightly less to same on R & D.”

To which Michael Li, who works at a company that measures sales rep visits and other data, responded with this: 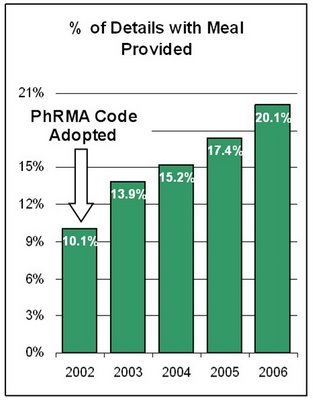 “The IMS promotion audit, called IPS, does not track free lunches or pens. So $7.3 could well be someone’s estimate. I worked there for many years.

“The trend of using meals in promotion detail has been up recent years.

“Among top 100 detailed brands for PCP in 2005, Lilly’s Forteo had highest percentage of meal provided in detail, 28.6%.

“Overall all, specialties had higher percentages of meal provided.

“ONCOLOGY had higher percentages (55%) of given meals in 2005, followed by NEURO, PSY and URO. DERM received least in free meals.”

This is a very interesting bit of data. In the chart I note that PhRMA’s Code of Interaction with Health Care Professionals became effective in July 2002. In the Q&A section of that document we find this:

“…if a sales representative is providing substantial scientific or educational information regarding a companyÂs products to one or a few healthcare practitioners, this could also be done during a modest meal which could be at or outside of a physicianÂs office.

I question if supplying meals during 20% of sales calls is “occasional.” Perhaps PhRMA Intern needs to investigate!

Interestingly, pharma meals (including mostly lunches) for physicians seems to have taken off soon after this Code was adopted. Many of the companies offering logistical support for reps to deliver meals on wheels to physicians also came into being around that time or soon afterward.

Effective of PhRMA Codes on Physician and Consumer Marketing
PhRMA codes of practice often shift spending by pharmaceutical marketers rather than decrease the spending overall. While free meals to physicians benefited from the 2002 code, companies offering golf balls and other, non-medically-related “chatchkas” suffered.

An analogous shift seems to be happening as a result of PhRMA’s Guiding Principles for DTC, which became effective in 2005.

MM&M Online reports that “DTC advertising spending by pharmaceutical companies was up 9% during the first half of 2006, according to data released this week by marketing information firm TNS Media Intelligence.” But the % allocated to TV was down while that allocated to print (magazines) was up. “Following the adoption of PhRMAÂs voluntary guidelines earlier this year, most companies pledged to improve accuracy and balance in ads. Since this is easier to accomplish in magazine ads, drug makers are using that medium more frequently, TNS research director Jon Swallen told the Associated Press.”

How Much Is Actually Spent on Free Lunches?
I tried to estimate this in my previous post and came up with $1.65 billion per year based on estimates of sales rep budgets.

Kevin Kaul from Scriplogix came up with a different number based on personal experience:

“Another way to estimate this is to take the number of sales reps in the US and estimate what their monthly promotional spending allowance is. For example, my reps used to get $1,000 a month, 75% of which was spent on lunches, donuts and other food throughout the course of a day.

“Obviously, some companies don’t have such a high budget, others have something bigger and others none. So, if we assume there are only 70,000 reps, which is just a guess at this point due to the downsizing which has taken place, and the average monthly budget for food is $400 per rep per month, one comes up with a number in excess of $3 billion per annum.”

What’s the Harm?
Many commenters suggested that free lunches do not influence physicians.

“I was a representative myself for many years in the UK & Ireland before moving to the USA. It was standard practice to provide light refreshments for practice staff & most reps were happy to do so. One of the main reasons being that health service staff (with the exception of the medics) were very poorly paid and had usually had a morning of stress dealing with up to 50 patients, most of whom don’t appreciate the service being provided to them – the downside of a free universal health service.

“Seeing a rep. with some nourishment & a smile on their face was a welcome break from their morning’s drudgery so we were welcomed with open arms!!

“The UK has a very strict code of conduct governing the pharma industry (The ABPI,) & this includes a stipulation that you must not offer excessive hospitality to members of the health service, the figure of anything above five pounds was deemed excessive. A sandwich usually costs from 2 to 3 pounds and fell within that figure, and considering it would cost many times that amount to take the medics to an expensive restaurant, I always considered that lunches were value for money, were a good use of my budget & I was giving something back to the hard working health care personnel who tolerated me as well as the grumpy patients. It also earned me no end of goodwill which allowed me the opportunity to be INVITED back which was very important, both in terms of building customer relationships and as a way of circumventing the ABPI code of conduct which said that you can only call on a medic THREE times in a 12 month period unless you were invited to come back to see the Dr. at his/her request.

“I agree that to imply anything sinister in this simple but cost effective practice is way over the top.”

“One of the small investments I made was in a deli. A pharmacist Customer (who happened to walk in one day and enjoyed the food) connected the Deli with a drug co sales representative. The rep was looking for good Sources to provide lunches for doctors etc. After that connection, the deli Provided lunches for a variety of the rep’s clients. Nothing excessive, and certainly in line with other deli catering clients like automobile dealerships, corporate workshops and lawyers. It seems to me that food was about building personal relationships. Pens, note pads, etc seem more impersonal and impractical (how many stress balls can you give a client?).

“Newsweek took something that has little conflict of interest and made it sound sinister.”

“Another important question is – did meals have any influence on physician’s brand choice? From a large amount of custom modeling projects, we found that meals sometimes had a positive impact and sometimes no impact at all. It depends on other aspects of promotion and marketing measures, as well as brand specific situation.”

On the other hand, Bruce Wilson, a medical writer from Quebec, Canada suggests undue influence:

“I have often overheard physicians talking to each other at meeting symposia. On one occasion a physician asked his colleague whether he would use the drug of the symposium sponsor or the competing drug? His answer, ‘It depends on who feeds me best.’

Would the drug industry spend $1 to $1.6 billion per year on an activity that has no positive return on investment? If it was Google, my answer would be “yes.”