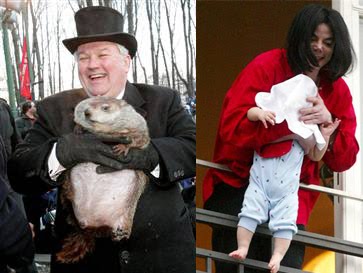 People for the Ethical Treatment of Animals (PETA) thinks it’s time to replace Punxsutawney Phil, the groundhog, with a robot because “Phil is forced to be on display year round…” and is subject to “the displeasure of large, screaming crowds, flashing lights of cameras, and human handling.”

In response, William Deeley, president of the Inner Circle of the Punxsutawney Groundhog Club, said Phil is “being treated better than the average child in Pennsylvania.”

I did not think that said much about how children are treated in Pennsylvania or elsewhere, especially if they are celebrity children. So I prepared this PhotoShop montage: